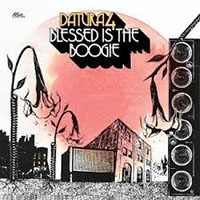 It's like the 1970s grew up, started shaving and finally got some action. Welcome to Riff City, kid.

The opening track, "Black Dog Keep Running", is a money shot and it keeps going from there. A muscular riff, an off-in-the-distance vocal and Warren Hall's sure-footed beat nails this to the floor. Then it takes off on a flight of fancy dual lead guitars.

The title track sums up things even better: A relentless boogie feel, greasy harmonica and guitars that roar like a bogan at the Bondi Lifesaver bar after they've ceased service and pulled down the shutters. Blues rock par excellence. It sounds like a cross between Chain and Carson, but with better production. Grouse production, actually.

Greg Hitchcock was absent for the recordings (hopefully not for the shows that will follow) and Dom Mariani handled everything with six strings, but there's no diminution of crunch. Mariani and bassist Stu Loabsby co-wrote the songs and they're keepers.

This is stoner rock for people who aren't stoners. No great irony at work. It's being played for real. The psychedelic element is still there but it's less pronounced. This music gets down in the dirt, not up in the clouds. It wears Blundstone work boots, not Dunlop Volleys.

Some songs meander in the finest mid-70's tradition but never lose their way. The cool "Evil People Pt 2" is a case in point: sultry organ rolls out underneath the mid-tempo feel and a singalong chorus chant while Mariani's stabbing guitar licks punctuate the outro.

"Not For Me" initially sounds like a son of a Died Pretty song - shades of "Nevermore" - before finding its own feet on the back of some spritely Mariani guitar. It's a reminder that when great Aussie guitarists are mentioned, Dom is sorely underrated. The traded lef-and-right channel guitar lines on "City Of Lights" will tell you as much.

If it's not Norm Roue on slide on "Run With Lucy" it's the ghost of Pete Wells.

If you're an Australian of a certain vintage (i.e. you grew up in the '60s and '70s) you'll recognise what's going on. It's Oz Rock. Blues-based, aggressively played stuff, hardened by exposure to beer barns full of three-parts-to-the-wind punters> It's the music that inspired a generation to suck more piss and extol the virtues of Thorpey and his Aztecs.

There's even a cover of "Ooh Poo Pah Do" but it's nowhere near as bombastically lame-brained as the version The Aztecs used to do. Jazzy organ and a feel with a spring in its step rather than a plod replace the melodramatics.

So you have to wonder what the rest of the world thinks of it. The last two records were adoringly received. It's undoubtedly just fine rock and roll to anyone else, but few Aussies of greying vintage were untouched by Oz Rock, whether we were stuffed into a suburban hall or glued to a transistor radio because Mum wouldn't let us go to the show. Datura4 deliver it without the fat or filler that many of the LPs back then used to pad things out.

Boogie was the music punk was supposed to kill when it belatedly landed in Australia at the turn of the '70s; "Blessed Is The Boogie" proves it dodged most of the bullets. The result is pleasurable. Feeling guilty? I am. Out April 5.