Captain Spud's latest is anything but meat and potatoes 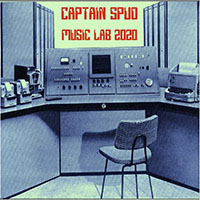 As you may gather, “Captain Spud” is a pseudonym.

No way the bishop held up that squalling, red-faced brat, smacked it's ugly arse and plunged it face-first into the font, intoning: “I christen thee Captain Spud”. Kid might've drowned, for starters. Awkward questions might have ensued. Simply hours of paperwork. Remember, pop kids, if you're going to go into the Catholic faith, don't drown the little shits. More trouble than the brief pleasure it might give.

Speaking of starters orders, I find in a cursory search for the great man from Adelaide (he's been a musician and music-maker for over 40 years) references to a blogger (“Captain Spud is Amazing” - I'm sure he is, hem-hem), several YouTube channels (including a chap who paints little dolls, and a chap blowing stuff up on a vidgame), a pseudonym for a gamer (still not the great man) and would you believe - a racehorse (“a three-year-old gelding by Toronado out of the Street Sense mare, Dane Sense”) once owned by Danny Frawley (a kicker of balls, apparently).

This particular Captain Spud is neither a kicker of balls (except when peeved), nor a blogger (hasn't the time, too busy recording or playing), nor even a gelding by Toronado out of the Street Sense mare, Dane Sense. I've written about the man I think of as “the REAL Captain Spud” before so I won't rabbit on too much.

This EP was “arranged and mixed by Captain Spud using individual instrument loops, edited, retuned and time-shifted. All samples are from royalty-free sources”.

This could be a lot of things, couldn't it? From FAB Lemon Fresh commercials gone terribly wrong (via Jimmy Durante, say) to 1920s musicals via dirty blues songs. I may have digressed into fantasy here.

But no! Despite the Kraftwerkian cover and obvious reference in the title, it seems fantasy has become reality, with massive pounding toms rippling out over a gritty guitar riff. “Demolition Driver” lives up to its name and you wonder how you ever lived without it.

“Dusty Sugarloaf, International Spy” is simply groovy, baby, all shimmering South American rhumbas and red curtains, with more than a hint of diamante bowler hats (and a basket of fruit on the head).

“Melancholy Intermission” seems to take the organ work of Fats Waller and twists it into, well, 1920s intermission music. Not that I was ever there, you understand. I might have seen the first Pistols gig in Manchester (despite living in Australia), but I don't quite go that far back.

“The Haunted Music-Box” is, frankly, like something straight outta Creepy Hollow (Loki Lockwood, are you listening to this EP?) via a 1950s B-movie. I can see the preposterous missile bra even now, breasts weirdly heaving in opposite directions (honestly, who came up with that daft idea? Didn't people have enough problems?)

Every single track here is bloody sublime. Riven with humour, spikes, creeps, tension and downright smarts. So much work has gone into them. They rise and fall perfectly, you'd never guess where the hell the good Captain has filched these snippets from.

Easily the best, and the most extraordinary, Captain Spud release (and I'm not talking about the poo released by the gelding by Toronado out of the Street Sense mare, Dane Sense)

Pester the REAL Captain Spud (not the painter of dolls, not the racehorse, not a gamer, not a bloody lost Archangel) for a copy here.