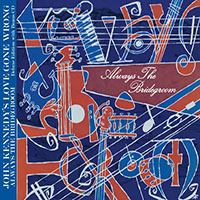 This 1987 album was a much-maligned chapter in Sydney artist John Kennedy’s back pages. For a few understandable reasons. The first long-player for Kennedy and his then-band, Love Gone Wrong, got a mixed critical reaction. Its sonic character rankled the band leader, and it presaged the line-up’s dissolution.

The story’s all there in Kennedy’s breezy liner notes (“The Album That Killed My Career”) and a few things stick out: The band was a relatively new line-up and lacked confidence. They’d tried too hard in preceding demo sessions that failed to raise interest from major labels, and the studio approach for the album’s recording killed any prospect of a vibe by using a click track to guide drummer Vince Sheehan.

Brisbane-raised, Sydney-domiciled Kennedy had been an inner-city success story up until then, one of the stars of the burgeoning Waterfront and Redeye Records stables. His distinctive Urban and Western country-flavoured stylings laid a trail for others who followed and garnered prodigious radio airplay – on some of the stations that mattered back then.

Fast-forward and Kennedy’s decision to let a re-mastered “Bridegroom” loose shows it wasn’t the absolute dog he thought it was. It lacks spark in places and the synthesised strings that briefly appear grate. Much of the guitar playing from future Welcome Mat member and ARIA producer of the year Wayne Connolly and Cory Messenger lands nicely. Michael Armiger delivers pliable bass-lines and harmonies. The production is unobtrusive, the material diverse.

“Hey Steven” is a strong starter with its lyrics about turning the back on Brisbane. “I Was Confused” jumps deep into a country groove with some resonating licks to kick it gently along. “You Will Find” is stilted and never gets into gear. There’s variety. “Strangers Kiss” might be the oddest song of the lot with a faltering bass-line and noodling guitar that hints at funk. “World Upside Down” (also included in its single version) traces the same path as Paul Kelly but with less conviction.

“Better Days” jumps the country line to find its feet – convincingly - in gospel territory. And an admission here that back then, I wouldn’t have been dragged into a show where where they played that shit without my gonads being in a vice. Time broadens the rear vision mirror’s outlook.

The packaging is top class with bonus tracks aplenty, and a second disc of a 3LO radio show by almost the same line-up sounding just great. It has a mix of covers (“You’re Gonna Make Me Lonseome When You Go”) and well-known Kennedy songs (“Miracle in Marrickville”, “King Street”.)

John Kennedy and the 68 Comeback Special will launch the re-issue of “Always The Bridegroom” at Petersham Bowling Club in Sydney on April 9 with tickets at moshtix.com