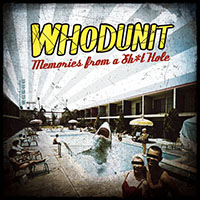 This Parisian band brags they’ve been “playing garage-blues-punk since 2003” and that’s no mean feat in a city where rock and roll gets simultaneously downtrodden by dance music and high culture.

Two more things in their favour is that they’re on Beast Records, a well-established home for music that flies a ragged freak flag, and “Memories From a Shithole” was produced by expat Detroiter Jim Diamond, the ex-Dirtbombs bassist and sonic master now spending much of his work-time in Montpellier. His credits include the Bellrays, the Fleshtones and the White Stripes so he’s qualified to make this sort of noise.

Importantly, however, there’s a swing in the engine room that sets them apart from many bands of their ilk, and keyboards resonate and jelly-roll through many of this baker’s dozen (that’d be 13) of songs.

Didier Whodunit (all band members except guest keyboardist J-B share the surname) has a blues shouter’s voice with a cool, burred French accent (probably because he’s from France) and howls like he’s on day release with the clock ticking down.

Didier and Tom’s guitars grind and squeal like a pair of randy ferrets at mating time. Greasy harmonica from Tom adds a sleazy feel. The songs aren’t half bad, either.

“Room 204” is frantic without being forced, while “Waiting” locks into a muscular groove before punching out an Alpha male chorus. There are not sweet and tender tunes to be had here. “Redrum” (apparently a French cover) is propelled by razor-wire guitars, tightly wound around each other.

Damned if I know what “You Fuck My Wine” is about even if it’s sung, like all the songs, in English. Diamond himself lends a hand on bass on this one. Then there’s the raucous sing-along of “Because You’re Mine” and the staccato attack of the Who-like “Salvation”.

It’s album number-four from Whodunit and it’s good enough to spark some frantic back-catalogue tracking. You, too, can do some exploring here and hit up Beast Records here if you want a physical copy.