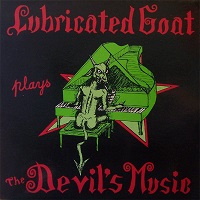 The Evil Star (real name: The Evening Star) was a professional hang-out of mine for a time, but I never connected on a first-name basis with all those Black Eye label bands. Which didn’t mean that I didn’t inhale the recorded output of The Goat, who were the label’s original and best-known act. I stopped short of buying the leather bondage gear they advertised in "B Side" magazine but I’m sure it existed.

Lubricated Goat was originally Stu Spasm (Salamander Jim, Beasts of Bourbon, Zulu Rattle) and a bunch of mates. Half the record was recorded while he was on holiday in Perth, the rest during a stop-over in Adelaide.Spasm sings/intones and plays guitar and synth. Brett Ford and Peter Hartley - both then on loan from the Kryptonics - are the willing engine room for most of the way, with Martin Bland drumming on a couple of tracks.

“In The Raw” isn’t on this vinyl re-issue of the 1987 album (you'll find it on “Paddock of Love”, the next LP) and with the benefit of hindsight, “Plays The Devil Music” is not the wildest, most offensive noise rock ever committed to vinyl. Not by a long stretch. But it sure sounds good, in its own dysfunctional way.

Like, who wants to be “Jason The Unpopular”? As Spasm’s slurred-spoken vocal has it, he got “mistaken for a poofter…and cried into his moustache…children spat at him…even the birds in the trees seemed to whisper ‘Get fucked’ ”. Smirk about Turbonegro’s faux gay lyrics all you like but Stu Spasm got there a decade before.

In another time, “Goats And The Men Who Ride Them” would be a swinging Rat Pack tune with glib lyrics where Dean and Frank riff on Sammy Davis Jr and his glass eye. In these Lubricated hands, it’s a lyric-less smorgasbord of unsettling synth and clicking fingers. If the breathless Barry White pisstake of “I Can’t Believe We’re Making Love” is all a bit obvious, just try not to smile at the use of “penis” in what passes for a chorus.