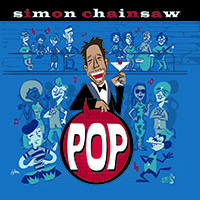 Simon is Sydney-raised and has spent a good chunk of time living in Europe and Brazil. His output is amazingly consistent. His guitar string callouses were earned many years ago and have never gone away.

Chainsaw fans might question the need to be so obvious in the title. Aren’t most of Simon’s songs pop? Yes, but you gotta call a record something. “Pop” retains the trademark Chainsaw grit, even in its lighter moments. It's also a move away from the metallic guitar tones some of his South Americvan sidemen imparted.

If you’ve been paying attention you'll know that Chainsaw records make themselves known from the get-go. Opening cut “Waiting” sets the pace for "Pop" with a rolled gold melody line, and muscular lead guitar courtesy of Frenchman Fred Allerat. Sydneysider David McKeowen applies his own beefy tone to “Wild Girl” with Simon again laying back on rhythm and baiting the vocal hook. That’s the pattern and the backbone of the record is from sessions, in Berlin, Paris and Brazil, with overdubs added in Sydney.

“Pop” boasts 11 Chainsaw originals, a co-write, and two obscure covers (“Pillar of Light” by ‘80s Aussie combo The Pressmen and “Mr Mowtown” from Argentinians Los Lotus.)  Simon’s songs don’t adhere to the conventional verse-chorus-verse structure, but that’s often a strength rather than a weakness.

There are some killer songs here: “Under Fire is a cracker, aided and abetted by Fred Allerat’s mighty guitar-work. “In The Moonlight” is right up with Chainsaw’s best compositions.  “Waited a Lifetime” applies some lighter guitar brushstrokes and firmly moves the record into pop territory. “Doing It By Halves” and “Life Don’t Stop” go in a similar direction and sit at the back of the tracklist. It's no accident.

“On The Road” and “Can’t Look Back” contain some of Simon’s most reflective  lyrics ever. These aren’t throwaway songs. Closer “Life Moves Faster” lightens the tone to close the record. It’s a resolution, of sorts, telling us that” life’s too short to fuss or fudge around”.

If there’s thing that nags, it’s that Simon Chainsaw should engage an outside set of ears to throw some different production ideas around a studio and make him take more chances in a production sense. The man is not short on ideas – he also leads a country rock band called Broham and an Oz Rock outfit, SC/TC, with veteran Acca Dacca session stickman Tony Currenti.

If you’re into Real Rock and Roll of the kind that we typically review around these parts, consider “Pop” an essential purchase. It’s for the bargain price of $A15 with shipping within Australia – head to Bandcamp or get to a gig. You can also use this PayPalMe link to send 15 smackas Simon's way. Overseas types should ask about postage This email address is being protected from spambots. You need JavaScript enabled to view it..