Stick a fork in it, I'm done 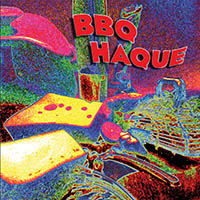 There’s a term we’ve been debating at home recently: Disassociative. Apparently it describes a state of existence where consciousness is disassociated from physical and ordinary psychological presence.

Some drugs are disassociatives; not sure what the others are (associatives?). According to a friend, if you have a series of late nights, coupled with a day job, you can become disassociated. I thought that was just being over tired, but never let critical assessment get in the way of a specious pseudo-medical term.

I’d describe Melbourne instrumental-psych-garage band BBQ Haque as transcendental; maybe they’re disassociative. Either way, you can get lost in BBQ Haque. But you’re not really lost, you’re just on a different plane. It’s a plane with a dusty spaghetti western edge ("Chilangos de los Chios’" and mesmerising beats and psychedelic chants. You’re dragged in, wide-eyed, devoted to the cause, if only you knew what it all meant.

"Amuse Bouche 1 – L’enfer du Théramine" is distant and haunting - like that moment in "Rosemary’s Baby" when Mia Farrow realises the glassy-eyed weirdos around her are into seriously bad cult shit.

"Cuisine Haque" is intense to the point of obsession; this is the dark depths where the dreams of the '60s were headed, until Madison Avenue wrapped everything up in coke-stained glossy packaging and turned it all to shit. ‘Sate Rate’ is a voyage close to the sun in a spaceship chartered by Jon Spencer and a bunch of washed up acid freaks. "Malewa FuFu" could pass for a pop song in the bent world of BBQ Haque; there’s a solid groove, glistening melody and Pebbles-esque beauty.

"Chou Mignon" is Krautrock on Malibu Beach; get hooked into this and you may never come out again, but don’t worry, ‘cause it’ll be a better place than where hang out normally. "Amuse Bouche 2 – Carnevale Fairy Floss" fucks with your head (again), but you’re already in the zone, so it’s too late to pull out now. And then coast out with "Sabayon Abandone", get caught in BBQ Haque’s enveloping psychedelic Dirty 3 rip and enjoy the ride, ‘cause things don’t get much better than this.

After a year like 2020, people need to disassociate from the pessimism, paranoia, piety that masquerades as public discourse and remember that there’s plenty of good stuff in life to enjoy, while you have the chance. And "BBQ Haque" is a damn good place to start. Take the trip, enjoy the view.