The Dry Retch drive it like they stole it 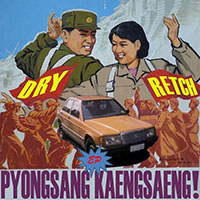 The UK owes the world an enduring apology for afflicting it with insipid shit like Robbie Williams, but there are signs of redemption if you look hard.  You’ll find it seeping out of the cracks in footpaths in big cities outside London, where high-energy outsider bands like The Hip Priests (Nottingham) and Black Bombers (Birmingham) hold the line. From one such dark fissure in Liverpool comes The Dry Retch.

You’ll know the back-story if you saw our recent review of their Stooges-obsessed “A Kick in the Gulags” EP.  “Pyongyang Kaengsaeng!” (allegedly Korean for “really shitty car” - would Little Rocket Man lie?) is their latest album - and it was launched on the undercard of a 2020 Brian James Q and A in Nottingham, no less. If tender balladry is your thing, look away, now.

Thundering toms, fuzz pedals and a nagging John Retch vocal announces “Hate The Young”, a surging slice of noisy, generation gap revenge. OK, Boomer!  “Pray for Rain” continues in the same vein. “Insect O Guitar (Locked On You)” ramps up the pace by several notches. “You’re the Reason” is an uncoiling snake of a blues crawler that sounds like the Chrome Cranks with a toothache.

The album centrepiece is “Road Rage Suite”, which is a 15-minute punk rock version of that prog rock affectation, the “suite”. This is a bundle of six songs - loosely themed by the topic of cars - that grind about and smash into each other.  The fragmented approach works - especially for those with a short attention span - and of course the Retch can’t help but break into “TV Eye” at one point in the penultimate phase, “40 in a 70 Zone”.

The Dry Retch employ an “all or nothing” approach with not a lot of room for sonic light and shade, and that might grate. On the other hand, their collective spirit, the guitar-work of John and JP and Paul’s bass-playing are worth the price of admission.

The album closer is a warts-and-all cover of Pere Ubu’s “Final Solution” that stutters before roaring off into the distance with a flurry of white-fury guitars. There are worse ways to spend six minutes. The album's available in CD and digital form from The Dry Retch Bandcamp.