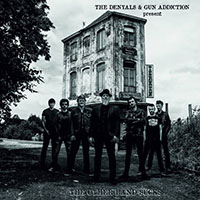 It’s a split album from two French bands on a label from Lille in the north of France, which is one of those old industrial cities that's cast off its blue collar for a suit and tie. Like many of those gentrified European cities, punk rock clings to life - an even thrives - in reduced circumstances.

The Denyals make crunchy punk rock and sound like a cross between the early Clash and Husker Du - slowed right down. They're a three-piece devoid of any trimmings and they use drop-outs to good effect. Errein's impassioned vocal and jagged guitar are splattered all over the six songs.

The savage "Disco Boy" and stuttering opener “Valentines (I Love Your Head)” are the real stand-outs. Errein's guitar sounds like the bluntest of surgical instruments on "My Sweet Swedish Things".

The Denyals don't go for the throat as much as dial back the tempos and get under the skin. The angst levels on "The Armada Sank" get a bit much before the band tacks on a funny little fast denouement.

At first listen, Gun Addiction play more like a "traditional" punk band with fast tempos and a similar ragged edge. They're a four-piece with a singer up front but have a fuller sound.

Scotchy's vocal ranges from a raucous drawl to an occasionally Rotten-like yowl and you don't need to see the band photos to sense he's a veteran. Most of his singing is in French.

Crami's guitar-work is a large notch above the standard two-chord buzzsaw fare and gives the music a fair chunk of its colour. Great tone and some intricate leads {"Tombstone") are at work here. The rhythm section is adept, as well.

The names won't mean anything to you if you haven't heard them but take my word for it that "Warming Pray", "OKO" and "Teens By Tong" are the pick of the litter.

Both "sides" of the CD were mixed by The Denyals' Errein and mastered by the sonic god of the garage, Jim Diamond, so that might give you extra incentive. That Denyals Bandcamp link below is the one to click if you want to listen or order online.

Antitune Records on the Web