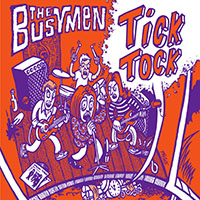 You ever hear The Elastic Band’s 1967 single “Spazz” with David Cortopassi’s mangled vocal intro? It’s on “Nuggets” (the CD box set version). Bob sings a lot like that. A lot of the time.

“Stop Starting Me Baby” is a greasy R&B tune peppered with guest Screamin’ Stevie’s wheezy blues harp and enough grime to repel a family of homeless roaches. “Dangerous” is a hip-shaker that might have done with its rhythmic elements being brought more to the fore in the mix but still goes alright. "In & Out" is a stomper with a bunch of swingt in its bottom end.

When The Busymen play this stuff straight they’re the equal of any. The closer is a cranky cover of Chocolate Watch Band’s “Don’t Need Your Loving’” that won’t so much melt in your mouth as stick in your craw.

It’s vinyl only. Buy your copy and file it next to The Hekawis and Shutdown 66 in your record collection and wonder why The Busymen have only done a single long-player in their 20-odds years.