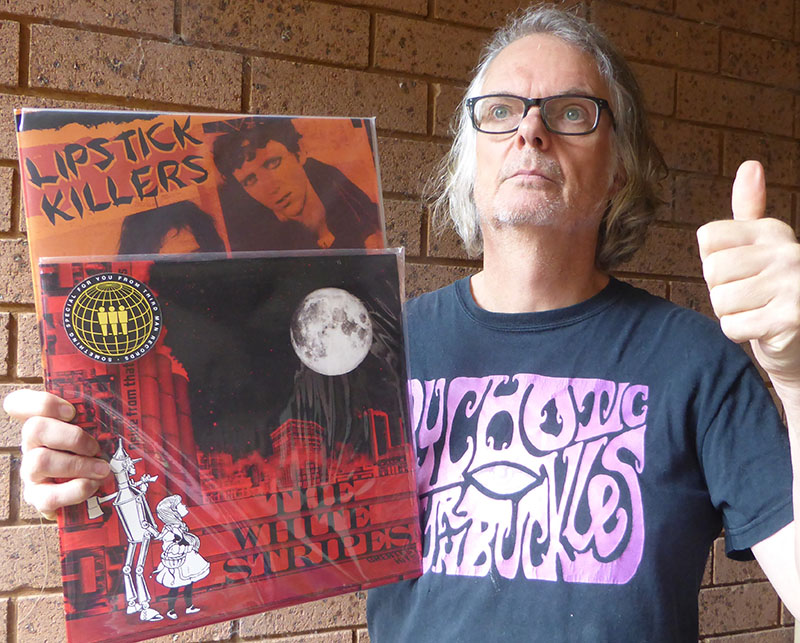 Buffalo (Revisited) – “Volcanic Rock Live”.
Imminent LP release (January 2022 I am told). It has been a rock and roll dream for me (as a long time Buffalo fan) to be playing these songs live with Buffalo foundation member Dave Tice. A live gig we did was recorded and deemed more than worthy enough for mass release by USA label Ripple Music.

Black Sabbath – Super deluxe box set releases of “Vol 4”. “Sabotage” and “Technical Ecstasy”.
I just got poorer and Black Sabbath and their managers just got richer...is that a bad thing??

Kitty Flanagan book: “More Rules For Life”.
Some people think that rules are kerbing their “freedoms” and are suffocating their need to behave like a dickhead…well not me. Rules are there to make life run smoothly for one & all. Consider this book to be like traffic lights for life. It’s simple, stop, go and be prepared (and I don’t even drive).

Kitty Flanagan “Live in Wollongong” DVD.
Kitty is very switched on to the wrongs of the world and don’t let anyone tell you she doesn’t know that. This stand-up comedy show holds a mirror up to the failure that we know as the human race.

Steve Kilbey Plays Church Singles 1980-1992 live.
Who’d have thought that Steve Kilbey would put together a crack six-piece band to honour the great history of Church A-sides and play them faithfully to the original records? They sounded more like The Church than The Church ever did live (which is quirky in itself).

Lipstick Killers - “Strange Flash” LP and CD.
An eternity in the making, A 49-song CD or 28-song double LP (take your pick…or get both as most folk did). It looks good, it sounds good...it smells good.

The Neptune Power Federation ‎– “Memoirs Of A Rat Queen” LP.
Released in 2019 but I didn’t get into them until 2021. My most played LP of the year. AC/DC guitars mixed with an early Rainbow and Queen kind of vibe…can you dig?

Amyl and The Sniffers – “Comfort To Me” LP.
These Melbourne buffoons keep expanding (musically and song-writing wise) with each release, it's still Aussie punky rocky but they are trying some new vibes. God fuckin’ bless ‘em.

The Last Words - “Animal World” LP.
London via Sydney and back again. 1977 punkers. This is a very welcome collection of their one LP plus some seven-inch tracks. Some of the album versions of earlier seven-inch tracks aren’t as good, but hopefully those versions will get their own release again soon.

Died Pretty & Fabels – The Factory Theatre, Sydney, live.
Fables are some folks from Swirl and The Church playing dreamy spaced out atmospheric non-rock. Cosmic light show too! They have a new album just out. I must get it. Died Pretty had the entire crowd smiling from their arses to their elbows. It was a well paced set and they played great.

Heels - TV mini series on a independent Georgia wrestling troop. Wrestling fan or not try and watch this.

Ramones Triple J 1980 Live At The Wireless RSD LP.
I was there...and maybe you were too. The band were firing (although Joey was straying from the vocal melody a bit too much).

Sex Pistols - 76-77 4 CD box set.
Another Pistols re-issue of old recordings (with 8 never released versions to tempt the doubters). The predicable cries from on-line chat group couch critics (“The Swindle continues!”, “ Ever get the feeling you’ve been cheated?”, “Cash From Chaos”, “God save the lead singers bank balance” etc etc). But at the end of the day it’s good to have a chronological collection of all of the known non-Bollocks recordings including B-sides /demos/alternate mixes in one book-shelf friendly collection.

You Tube on the Telly
Well, YouTube has been around forever hey, but I now have it on the big screen and I’m addicted.

Hits – “Live In A Fuckin' Blizzard” LP.
The world is a better place with the mire existence of Hits. The world needs more dangerous rock and roll creeps like Hits.

Honour list
Sadly the older we all get the more of our comrades will fall. We will always miss them and their great contribution to the fine arts.

Disturbing trends for 2021
Album covers being released as jigsaw fucking puzzles. WHY???

Hopes for 2022
I get to see the X Ray Spex doco, some gigs, Cool Charmers album

Steve Lorkin is a Sydney musician who has played in Buffalo (Revisited), The Cool Charmers, Four Stooges and some others. He is an occasional I-94 scribe and a wanna-be influencer.