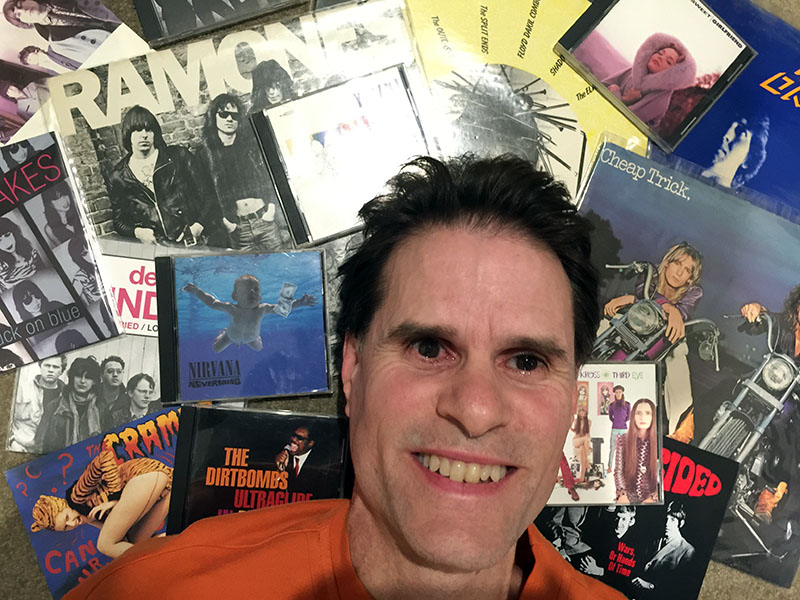 1. COURETTES – “BACK IN MONO” (DAMAGED GOODS)
The Courettes still seem to be without profile in these parts but have been gathering plenty of fans across Europe over the past few years. A Brazilian/ Danish wife (guitar & vocals)/ husband (drums) team who have been fine tuning their garage crossed with 60’s girl group sound, culminating in this whizz bang LP.

2. HARD-ONS - I'M SORRY SIR, THAT RIFF'S BEEN TAKEN (CHEERSQUAD)
I thought the prior Hard-Ons album was their best yet and then they go and drop this. Hard to beat!

3. CIVIC - FUTURE FORECAST (FLIGHTLESS)
Fantastic rockin’ album which delivers on the promise of their earlier EP and singles.

4. REIGNING SOUND – “A LITTLE MORE TIME WITH REIGNING SOUND” (MERGE)
Great to see Reigning Sound return with a new album. Some beautiful moments on this record, and tasteful playing.

5. IMPERIAL BROADS – “COUNTERPART” (BROKEN STONE)
Absolute knockout album from Sydney’s Imperial Broads. They deserve all the accolades they’ve received for this, and then some.

6. ON AND ONS - "BACK FOR MORE" (CITADEL)
On and Ons continue to better themselves with each album they release. So many great songs, plentiful hooks and fab harmonies.

7. EXBATS - "NOW WHERE WERE WE" (GONER)
Father/daughter band from Texas who have built on their indie-garage roots to produce this wonderful album. It’s got a 60’s girl group feel, but add some country and garage-punk to the mix.

8. S.U.G.A.R. - "S.U.G.A.R." (ALIEN SNATCH)
Not to be confused with Bob Mould’s 90’s outfit, this is a rockin’ band out of Berlin. This is only an eight-tracker so maybe it’s a mini-album, but they play tough and kick this along very nicely indeed.

10. SOME JERKS - "SUMMERTIME FUNTIME" (KASUMUEN)
Fabulous Brisbane band who have given us their best album yet. Wonderful vibrant and sometimes moody pop.

1. SHANG HI LOS – “KICK IT LIKE A WICKED BAD HABIT” (EP) (RUM BAR)
Latest outfit led by Ms Jenny Dee, formerly of Downbeat 5, Jenny Dee & The Deelinquents, the Dents etc. Together with Dan Kopko they’ve come up with a bunch of fabulous songs that swing as much as they rock. On the ace Boston label, Rum Bar.

2. APPALOOSA/ BBQT – “BIG DINNER/ JUMP OUTS” (NO FRONT TEETH)
Split single with two songs each by Appaloosa and BBQT. All songs are terrific! BBQT mines dirty glam while Appaloosa do a nice take on rockin’ pop.

3. KID GULLIVER – “BOY IN A BUBBLE” (RED ON RED)
Kid Gulliver is essentially Simone Berk on vocals and David Armillotti on guitar and they ply their trade in great pop songs. This is just one of a bunch they released in 2021.

4. SMIRK – EP
Second release from what is essentially a one-man band for Nick Vicario. Post-punk influenced sounds with a sense of rockin’ urgency.

7. REFLECTORS - "ALL MADE UP" (TIME FOR ACTION)
Buzzcock-ish in all the right ways. LA band who released this as a lead in to their recent second album.

8. PAUL BERWICK'S MAGNETIC QUARTET – “STEP INTO THE LIGHT”
Wonderful new track from Paul and his ultra-impressive band. The playing on this is first rate and Paul is in good vocal form.

10. PELAZO - LIE TO ME (FOLC)
More great power pop, this time from Spain. Both sides hit the sweet spot.

11. JOHNNY CASINO & THE APOSTLES – “TWENTY TWENTY” (FOLC)
Johnny released more great music in 2021 and amongst his releases were a couple of killer singles. This one surfaced earlier in the year while the other, "Another Girl", dropped in December.

CHEAP CASSETTES – "SEE HER IN ACTION"

ZACK STATIC SECT – "DOWN AT SLIMS"