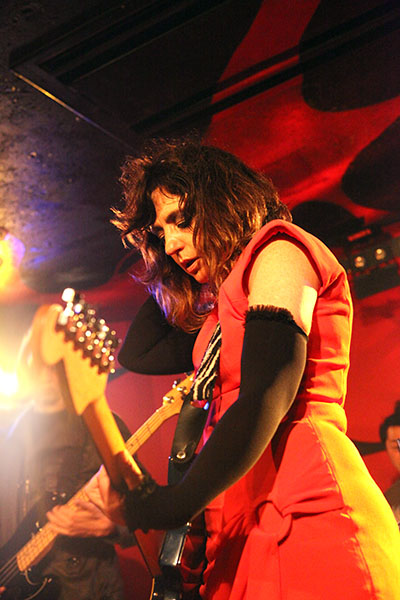 Firstly, thanks to The Barman and I-94 Bar contributors Keith Claringbold, Dylan Webster, Matty Ryan and Edwin Garland who included my shows with my band in NSW and Melbourne in their Top Tens for 2022. That is so cool and greatly appreciated! Thanks to everyone who came to these shows! It was fabulous to see so many “old” friends there!

Thanks to the musicians who played in my band – Tim McCormack on bass, Jason McGann on drums, Julian Held on guitar, Sam Billinghurst-Walsh on guitar and Ryan Oliver on keyboards. They are worthy of the attention they have been getting.

In fact, thanks to all the musicians who performed live on the indie rock circuit in 2022. These are not easy times for many musicians, and it’s been fantastic to see so many artists back in action on stage, in the post lockdown world. Often, I cross paths with them when they attend other people’s gigs as well. It’s a wonderful thing to behold - intrepid rock’n’roll soldiers leading the charge to bring live music back into the forefront of our hearts and minds!

It is so important for all of us to get behind the live music scene and the time is NOW. If fear of the dreaded lurgy is holding you back, then please consider what other ways you might be able to offer support to our rock’n’roll soldiers doing it tough. Do something, anything. Do it NOW.

Our live scene depends on YOU! You may be in for some mind-blowing aural adventures!

Best gig from a band I have never heard of before goes to SUPER-X, a Melbourne based post-punk noise three-piece (two guitars and drums) who sound at times like The Stooges on acid. What more can you ask for? This band was brought to my attention by Rhyece O’Neill, who recently released a stunning cover version of my song “Sycamore Tree”. You can listen here.

Best gig from a band I’ve heard plenty of times before goes to THE JOHNNYS who played an awesome show at The Tote in Melbourne. No frills, heaps of thrills, plenty of beer spills. Raw and uncompromising. They’ve still got it!

Best gig from a band I wish I heard more of goes to THE HITS from Brisbane who have got to be one of the best live bands in the country. They headlined a show that I was invited to curate for The Tote’s 40th year anniversary where I selected acts whose music has inspired and influenced my own rock’n’roll journey. The Hits’ performance was riveting and characteristically dripping with that magical element found in the best rock’n’roll – danger!!! Just the way I like it! Also appearing on this line up were JJ McCann Transmission and Tendrils (Charlie Owen and Joel Silbersher) who both put in blistering sets.

Best gigs from my support acts goes to THE ON AND ONS and PAUL BERWICK’S MAGNETIC QUARTET who joined me at The Marrickville Bowlo in Sydney. I was so thrilled to hear these guys play. Back in Melbourne, I was supported by the aforementioned TENDRILS and CHARLIE OWEN (solo) at The Chapel of Rock in St Kilda. Charlie opened the show as guitarist and vocalist, playing songs from his musical past – a treasure trove indeed. All these acts include so many talented musicians who have been playing around the traps for a long time. Friends and comrades who carry the stamp of authenticity – something that cannot be bought.

Best festival was DO THE POP which was curated by Mick Simpson from Grindhouse. A mammoth achievement and a stellar line up including Stoner (USA), The New Christs, Hoss, The Dark Clouds, Chimers, Blowers, Baby 8 and many more. The New Christs really nailed it (as always). Thanks to Mick for bringing your vision to life and for including me and my band on your line up.

Best film “GOLD – An Animated Rhapsody”, a concept put together by drummer and multi- instrumentalist Ashley Davies. The soundtrack to GOLD provides the background to a series of paintings by Ash Davies’ Uncle Len which tell the story of gold prospector Harold Lasseter. This is brought to life by the excellent musical score by Ash and by the stunning animation of the stories in the paintings. Beautiful, evocative and mesmerising

Best E.P. goes to HOWLIN’ THREADS, a dynamic three-piece from Yass, Wollongong and Newcastle. Their E.P. “Of The Sea: features guest appearances from yours truly on vocals. as well as Deniz Tek, James McCann and Kent Steedman on guitar, James McCann on harmonica and Brent Williams on keyboards. Vocalist/guitarist Dylan Webster writes songs that are catchy and well-crafted, and his band rock. Listen here.

Dylan’s musical influences hark back to the golden era of Australian rock, as we know it. The readers of this page will be well and truly familiar with what era I am talking about. If you tune into his radio program Yassville Skyline on Yass FM, you get the picture. It’s interesting how bands such as Howlin’ Threads have picked up the baton, whereas some of the musicians who were part of that scene have morphed their sounds into new territories.

A case in point is my choice for best album, which goes to GARRY GRAY and ED CLAYTON-JONES for “We Mainline Dreamers”. Garry hails from Melbourne band Sacred Cowboys (who I used to play guitar in from the 1990’s onwards) and Ed from The Wreckery. Drawing from their past influences, their music breathes rock attitude, and they mix this vibe with electronica. It’s a combination of the old and the new. The atmosphere is poetic, brooding and surreal, haunted by ghosts of clipper ships.

Best book goes to LO CARMEN from Sydney for “Lovers Dreamers Fighters”. Singer/song writer/actress/author, Loene is no novice to the world of show biz. It’s a memoir about her experiences told through stories about other seminal Australian female artists, including musicians Chrissy Amphlett and Wendy Saddington, amongst others. It’s a compelling story of female trailblazers. Loene writes with eloquence, insight and nous. A must for anyone interested in talented, rebellious women who made significant contributions to Australian culture.

Best party goes to THE BARMAN. It was well worth making the trip up from Melbourne for. If the local pizza parlour and bottle shop suffered under the lockdowns, they surely made up for lost sales that night. Icing on the birthday cake - some excellent performances by Jupiter 5 and White Knuckle Fever.

Before I go – rock’n’roll honours to KEV LOBOTOMI, who recently wrapped up his program Shock Treatment on PBS radio (Melbourne), after 33 years of service. Kev is an absolute legend and a champion of Australian punk, hardcore, garage and rock.

Best wishes for 2023 and keep rockin’ everyone! I hope to see you at a gig somewhere, sometime soon.