Written by Robert Brokenmouth on 26 October 2016. 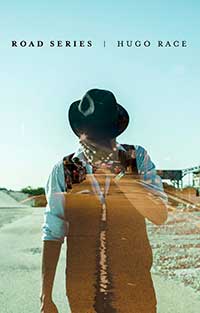 From the first sentence in "Road Series", you’re in Hugo’s world, his past, present and by implication, future.

“Road Series” is one of the main reasons that a poor bloke like me can’t ever get history quite right: we have the dates, the events, the chronology lodged and squared away. But people like Hugo carry the emotive rationale, the anti-rationale, and the … moving finger writes inevitability of their lives locked inside them.

I suppose we could all say we have that, but few, very very few of us could write it out and get it right, express it right, show us who warn’t there just how it wuz.

We instantly inhabit Hugo’s world because, first and foremost when you’re reading a memoir, the writer is telling their story. Second, “Road Series” possesses a vividness, a real-in-colour sensation to it which so many memoirs of the punk and musical new wave period completely miss in their hurry to put down their rivals, tell juicy anecdotes and, basically, gossip.

And I’ll just say this, for an autobiographical account of a significant St Kildan musician from this rather bitchy, backstabbing period, there is an astonishing absence of tittle-tattle, knife-wielding and general spite. Hugo is remarkably matter-of-fact about things, and (again, from page one) the maelstrom continues like that whirling Tasmanian devil from the Warner Brothers cartoons.

Put another way, Hugo Race knows how to tell a story from the inside and bring us in, cheering, from page one all the way to page 360.

Without clutter, then, Hugo discovers the musical, art criminal underworld of St Kilda at a time when drugs and kicks were high on the days’ menu. I could make literary comparisons at this point, but that, frankly, would be to point you in the wrong direction.

Music, and making it, is Hugo’s world and his reason for living, beyond that, for a long time he seems to survive on raw emotion sanded or sculpted by one stimulant or another. That in itself, of course, should be a recipe for grim disaster; instead, he passes through portals, tunnels, mazes and battlegrounds with an aplomb he doesn’t feel and cannot believe.

In fact, one of the book’s sub-themes is that of belief and belonging or, if you like, not belonging and struggling to marry one’s own outsider self to the wider, broader, uglier sets of selves.

For those of you wondering why on earth you haven’t heard much of Hugo Race but have heard of Nick Barker (30 years ago they were in seriously popular The Wreckery), on page 55 we’re drawn into the meeting between The Wreckery and Michael Gudinski of the Mushroom empire;

“This is the break? It feels more like the end … a chasm opens beneath my feet: spooked by certain soul death I get straight to my feet and walk straight out of the room … Since the beginning I’d sworn to myself no sell-out, ever, and it wasn’t going to change now.”

The rest of the band, reports Hugo, were “disappointed”. I’ll bet.

One does rather wonder what might have happened had Hugo stayed in the States in 1984 after the Bad Seeds tour, and took up playing there instead of returning home. At that point, Asylum, or perhaps Island Records, might have been sufficiently interested to take him on. But it’s a moot point. In Australia, back then, there were only three levels, really, the unsigned and never going to get beyond - ; the bands popular on a small if significant label; or those on Mushroom or similar. There was no middle ground, no professional industry willing to take a punt to nurture and nourish a growing, developing band.

And of course, there are even fewer outfits like that now. Race’s career has been a constant creative surge, it seems, born of the urban surf and tidal jetsam. His music is more relevant, I think, now than it’s ever been, more linked to his origins and inspirations (discover them yourselves, they’re here) and … yeah, I may have said this before, but in thirty years’ time we’ll be regretting all the Hugo Race shows we never went to, and people will be claiming they were there like they used to for the Sex Pistols at the (fucking) 100 Club. People who lived just down the road from pubs and clubs where Hugo would play, but who never shifted off the couch, will write learned books, heavily referenced with academic names.

You know, the kind of people who, when that kook Jack Kerouac comes by and asks them if they fancy driving to the other coast in a piece of shit motor car, tell Jack they have an important position to uphold and that the boss needs them. Comparisons to Kerouac, by the by, are neither OTT nor inappropriate. One could argue that Hugo’s entire life is a kind of variant ‘On the Road’, but with rather more - and more extraordinary - characters and events.

“Road Series” is also one hell of a quotable book; ‘I unplug the instruments and power down the mixing console while John and Mikal open the ventilation grate above the mixing desk and the noise of the external world fills the shadowy basement - car horns, shouts and strange cries, rockets whistling through the streets, explosions like small-arms fire in the distance…’

No, I won’t give you the context. It’s rather wonderful, though. Perhaps the most interesting thing about “Road Series” is that, throughout all Hugo’s travels, the more things change the more they stay the same. Human nature, our damage, our flailing attempts at survival… the patterns of civilisation are one of the books’ more unconscious sub-themes, like swirling cyclones viewed from space ‘… a Europe rapidly disappearing before our eyes. The Cold War has thawed, the Wall has fallen and the New World Order is licking its reptilian lips at the thought of the feast yet to come with much talk of free markets, deregulation and the end of history. How could we leave now?’

The “now” in “Road Series” may as well be right now; only the identifying countries intent on forming their own NWO has changed.

If Hugo Race is still alive in 30 years time, he’ll be out there, playing, singing, still trying to crack his own code, on his journey between myth and reality, cargo cult and humanity, machine-digital age and dirty old streets of dirty old towns…

There’s really only a few rock and roll books which are essential (even more so if you’re not much of a reader). “Road Series” is one of them; I mean, hell, here’s a book with so many highlights there’s actually too many to mention. Quality, sense, emotion, roller coaster but…yeah, you can dip in and out of it. I’d like to see “Road Series” done as an audio book, too. Greedy monkey that I am.