Written by Robert Brokenmouth on 19 January 2022. 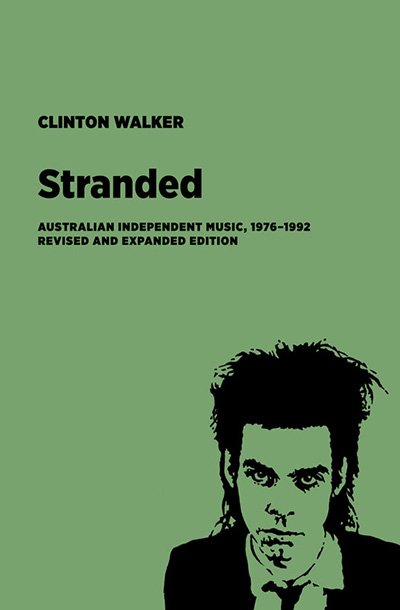 First issued in 1996, the brilliant “Stranded” was Clinton Walker's second "overground" success (his first being his biography of Bon Scott two years earlier), and was a more readily-available primer on how Australian music - as a whole - abruptly changed into something both credible and world-class.

After following them from their first releases I saw them twice in 1989 and was startled to find them merely okey-dokey. But hey, in 1991 the Youf were riding on the crest of a wave which I s'pose they thought would take over the world - but I wouldn't call them punk - or indeed, anything much like it. Maybe their first LP came close?

I mean, I recall hearing Nirvana on commercial radio in 1990 and thinking that it was about time the mainstream got with what had been around what seemed like forever. With one or two exceptions, Nirvana always struck me as a pop band - Mudhoney were more punk, surely? Look what Mark Arm's done since then... am I digressing?

Another example, just for kicks: Walker was inspired by (among others) Jon Savage's “England’s Dreaming”; even on my first reading I found it over-researched and annoyingly lopsided, with far too many value judgements without properly talking to enough of the participants (and far, far too much input from fabulist extraordinaire Malcolm McLaren) - and yes, I'm including the book’s second edition.

In fact, I'd go so far as to say that, however influential “England’s Dreaming” was (and, I suppose, is), it's so inaccurate that as far as I'm concerned it resembles Gitta Sereny's 1995 book on Albert Speer. Let me be clear: both Savage and Sereny are/were damn good researchers, but both strike me as being far too credulous, too in awe of their subjects, as it were. Just as a chap called Martin Kitchen published a book on Speer in 2015; how I wish someone would produce something more balanced than “England's Dreaming”.

But tough noogies on me, because The Life (as Walker refers to it) is more like an unending maelstrom of emotion, exhaustion, fever, hyperbole and hallucination. What is real is not always real, what happened is not how you recall it. The term "roller-coaster" is often used to describe the rock'n'roll Life; anyone who's really lived it knows that "roller-coaster" minimises, if not trivialises, the true rock'n'roll Life.

Verbatim from Walker's preface, then:

The scene and the Life were a surrogate family for so many of us who’d cut all our original ties and set sail in perilous and uncharted waters. It wasn’t a careerist move, at least not for me. I was just living the dream, as the cliché goes, now that I can articulate it, and everything I did was underwritten by being on the dole, as everybody was. We considered the dole an ersatz study grant, the kind of cultural funding that was otherwise denied to us lowlife scum as opposed to highbrow ballet dancers and symphony orchestra musicians. It was a tight-knit circle and, like the music itself, one that kept on turning, expanding, contracting, splintering, intersecting, with much feuding, bed-hopping, back-stabbing and needle-sharing. But always coming back to connections and values forged in the late ’70s.

People forget that the internet was in its infancy in the early 1990s. These days research (heh, as well as resurch) is a lot easier with the internet - although with the cuts to resources like Trove it means that, as usual, our perspective on our culture is as lopsided as Savage's “Dreaming”. I'd be less than honest if I claimed Walker's “Stranded” to be brilliantly balanced - but it's not supposed to be a comprehensive history of the subject (as opposed to Savage and Sereny): it's a personal trajectory with a raft of other personal trajectories. Vivid, real, intimate ...

To some degree, 'Stranded' has to become a time-capsule twice over, maybe even thrice over, for the reader too. It has to be read with an awareness that it was written not in 2020 but in 1995, a quarter-century ago, its point of view that of a thirty-something recovering addict reflecting on what was then (his) very recent history. I say maybe even thrice over because, decades after writing it, and longer still after many of the events described in it, I see so much so very differently, and have had to find a way to accommodate that altered vision as well.

Both editions of Walker's first book, “Inner City Sound” (1982 and 1995 - revised and with a CD) are as essential to any Australian music nutjob as the first edition of '”Stranded”. As Walker: says "The original edition of the book juxtaposed a core of retrospective storytelling - oral history and analysis looking back on the period in question in hindsight, however short-term - with occasional quotes from the period itself (like flashbacks)"

So, here's the second edition. And you need it on your shelf. What's the difference?

Well, first, rather than interfere with the speed and impact of the first book, this edition has footnotes which are easily ignored if you haven't read the book in the first place (and if that's the case I find myself wondering why you're reading this at all) but offer a rich meaty soup born of age and perspective.

city Me, I love footnotes. A raw narrative often leaves things out, sacrificing detail for pace and place and odours ... Walker explains, "I thought it would be good ... to run the original text on the left-hand pages, and the truth, I’d laugh, on the right. And indeed it’s boiled down to something not unlike that." Truth, myth, reality, disguises, history and living the real events, documenting them through a haze of half-truths, dissociating substances, rumour and distorted perspective.

Walker doesn't merely correct a few factual errors but, as he puts it, "errors of judgement".

There's humility in that, by the way, and that's what this edition of “Stranded” has - unlike Savage or Sereny.

There are different visuals; the book is blocked-out differently, making it easier to read, especially for those members his (and my!) aging audience increasingly dependent on bifocals and adult nappies. Today, much of what is in the past is eulogised, often at the expense of the real; one reason why Richard Lowenstein's film “Dogs in Space” is so valuable.

Walker muses that "the best way to encapsulate what this book is about, and why it had to be written: because these were always great songs, yet they were spurned at the time - and with such extreme prejudice that if they weren’t simply crushed, their creators were at least forced into exile."

Well, yeah. Exiles, the underclass, deep in the trenches, the stygian depths where currents run deep ... Walker has always been attracted to the underworld of our culture, underworlds which make Australia what it is. Where people realise there is a crying emptiness in the burbs with the babies and cats and dog walkers and fitness-obsessed MILFs and Dadbods (who no-one with any sense could respond with anything other than amusement or "Ew!") and it hurts so hard they ... do it themselves.

We make our own subcultures. Muscle cars. Minor league footy. Drug addictions. Live music - including country music. Men and women. Walker's written about all of these things. He may think he's escaped The Life of underground rock'n'roll by chronicling both the times and his life ... but he hasn't. No, not really.

Here's a lyric from Alex Chilton:

People think that I'm a rich musician
But no, that isn't my condition
Let me just describe my position
It's way down, it's all the way down...

Sure, there are bands who are firmly mainstream, always have been and always will be, that I love. But my heart and soul is in the depths, the underworld.

I suspect that's where Walker's soul is, too. And, this edition of “Stranded” is a meatier, speedier, richer and very more-more-more. If you were there, you'll remember, and if you weren't, get on the bike, flick up the kickstand and roar.