Sonic's Rendezvous Band: The One That Got Away - SCOTT AND SONIC

Initially, Scott provided most of the original material, but as Fred started to write more, competition between the two frontmen began to emerge.

SCOTT MORGAN: The way it boiled down was, Fred would sing his songs and I would sing my songs. We tried to write songs together, but just never got off the ground with it. We were each writing our own songs, and it was kind of like an inspirational thing, like Fred would write a new song, then I would write a new song, and then HE'D write a new song, and we kind of inspired each other to be more creative and try something different next time. Our own sound was fresh and progressive. He started writing more and more songs, and that meant that he was singing more songs. I don't think it was initially a conscious decision.

I thought it was actually great, y'know. I didn't really lean one way or another, "Let's do all this or all that." I thought it drove both of them.. I don't think either of them ever wanted it to get to the point where they were doing all the other guy's songs. So they were pretty much pushing each other, although they never talked about it. I think it WAS a good thing.

SCOTT MORGAN: I think Fred always DID want to be a frontman, but I don't think he had the confidence to do it when we first started. I think he realized that I should be the singer, he should be the lead guitar player, which is pretty much the way it started out. But it kind of evolved over five years into a situation where he was writing more and more songs and singing more and more songs, and I'm getting kind of like pushed out of the picture, as far as a singer goes.

In the '76 to '78 period, it was like that, and it was really healthy and it worked really well. And we each had about half the tunes, but as it got more and more Fred and less me, it started getting unbalanced. Like the two [Mack Aborn] records..."Sweet Nothing" was May '78, and that was right at the peak of when we had the perfect balance, it was about half each of our songs, maybe Fred was singing one more than me, but it was fairly well balanced. We never counted that way; we never said, "Well, you sing EXACTLY half and I'll sing EXACTLY half," but when it was about at that period, it seemed to be the strongest. Later on Fred started getting a little more eccentric, I think, and he wanted to try different stuff. 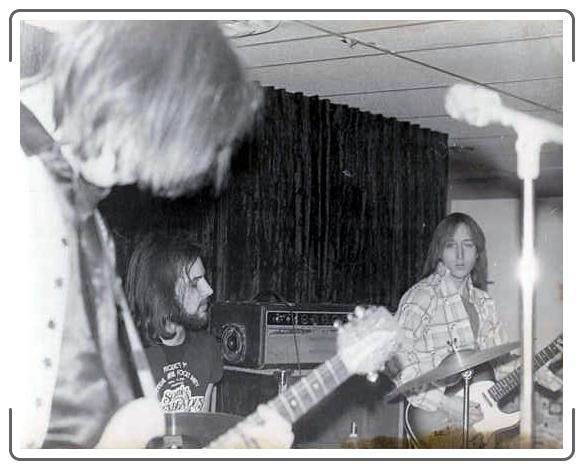 GARY RASMUSSEN: In a lot of ways, it was Fred's band, not because it was like "this is FRED'S band," not like that, but more like when you're trying to work, especially in a band, you're working with all these people...Fred was an odd guy. Not a bogue guy or nothin', but as it turned out, if Fred didn't wanna do it, it wouldn't happen, basically.

So in a way, I think he kind of led the thing just by being the way that he was. He'd get everyone's opinion on everything, and then he would kinda decide what HE would do. If he wasn't into doing it, we wouldn't do it, because you couldn't persuade him to do anything that he wasn't into doing, whether it meant money or anything. He kinda had his vision of what things were. But it wasn't like we were fighting all the time with him, either. Like I said, he'd want to know everything you thought about everything, but he wouldn't really give up too much of what HE was thinking.

I think he came into his own or something, kinda realized that he could really do this. With that group of people, too. We certainly allowed him to do whatever he wanted to do. And that band evolved totally from the beginning to the end, too. Because when I started with the band, we probably did three quarters Scott Morgan songs and a quarter of Fred's songs. When I thought the band was the best, we were doing about half and half, Scott's and Fred's, and it went on [until] by the end, we were probably doing three quarters Fred's songs, and a quarter Scott's songs.

DENIZ TEK: I never talked to Fred about it, but the other guys told me that Fred was an extreme perfectionist, and he was never satisfied, and they did actually attempt to record (or start recording) more songs, but Fred would cancel it because it wasn't going the way he wanted to. He would only have it a certain way and apparently those two songs were the only ones that were working out to his satisfaction. Stereo and mono version of the same song on two sides of a vinyl 45...it'd be nice if there was more! But in a way, it makes it even more special. I think that the Freddie Brooks and Bill Lord CDs are an excellent document of the band...better than I ever expected to find.

Fred was real reclusive. He would just sit there in the dressing room with those guys, and he'd be smoking a cigarette and having a drink, and say nothing. He would occasionally say one or two words to me and smile a little bit, and people later would say, "Wow, he must like you a lot 'cause he said so much to you!" And of course, Scotty Asheton, when you first see him, he's real intimidating, and he doesn't say anything either until you get to know him. So you've got two guys who are stone-faced and intimidating-type characters - I never thought Fred was that intimidating, but Scotty appeared to be dangerous when I first met him. He's NOT; he's real gentle, actually. Scott Morgan, on the other hand, was more willing to talk. He's more of a conversationalist.