Sonic's Rendezvous Band: The One That Got Away - SPACE AGE BLUES 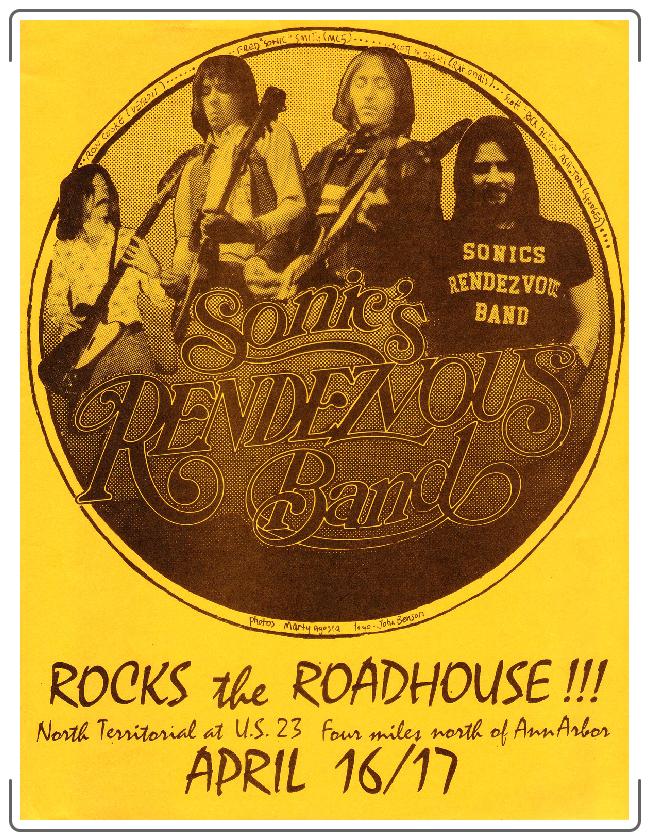 Michael's replacement on bass was W.R. (Ron) Cooke, who'd played with the band Detroit in both its original Mitch Ryder and later (former Amboy Dukes/future Cactus frontman) Rusty Day incarnations. In between, he'd had a spell in Cactus and a blues-based band called Catfish, led by Bob Hodge..

RON COOKE: My relationship with the MC5 and Fred and those guys goes back a long time in Detroit, I mean from when we were like 15 years old. When the MC5 weren't even the MC5, when they were hanging out in Lincoln Park, Michigan. I kinda went in and out of that scene with those guys for our entire musical lives, our entire lives, really. We grew up basically down on the lower southwest side of Detroit, in the suburbs, playing gigs and being in battles of the bands and all kinds of nuts things like back in '63 and shit. In Detroit, to a certain extent, it wasn't that it was cliquish, but there was a group of guys that kind of gravitated together.  About '73, '74, I had been out of the Detroit group for probably a year and a half, and I just wound up doing some gigs with some bar bands, just jamming around and doing that kind of stuff, and I got a call from Dennis Thompson and he had this thing he was putting together. I jumped on my motorcycle and rode back down to Detroit, and I met with Dennis and I think Fred was there. We kinda chewed this thing around a little bit, and I think we got together a couple of times and jammed, and then that thing kinda disposed and I got a call from Fred maybe like eight, nine months later, when Fred was living on the west side of Detroit.

This is the VERY BEGINNING, because Sonic's Rendezvous Band was me and Fred at the beginning, and that was it. No drummer, no nothing; me going down to Fred's house on the west side in the afternoon and jamming in the afternoon. Having tea, walking down the street, down to Michigan Avenue, going down to the bakery, coming back, smoking a bunch of cigarettes, drinking more tea, and jamming in the basement, and it progressed from there.  I got the first gig we ever did. I knew some hoodlums over on the east side of Detroit that had a bar, and we got in there and played a couple of nights in there. I think that we did some things at the old Miami, too...down on the Wayne State campus. For sure, we did a couple of things at the Second Chance in Ann Arbor, which was the premiere venue-type hall in Ann Arbor at the time.

[When I started playing with Fred], we didn't do any of the Five stuff, no covers. Really, the Fred thing and me was really a kind of a jazz-type rock improvisational jam thing. We laid out different parameters where we would go, and then we'd run in between and in and out of that. I do remember one song that Fred and me did compose together. It was called "The Grand River Subway." It was an instrumental jam and the premise of the jam - and it was a pretty funky thing - was to create a musical trip up Grand River Avenue out of Detroit, from downtown Detroit. Fred says, "Well, let's just think about...we're on a subway and we're starting off in downtown Detroit, and we're going to go all the way out through the suburbs with it." It was kind of a cool premise...it went from inner city funk, rock, blues, y'know, into the rock thing out in the suburban thing. It was a neat trip.   I've got two fabulous recordings, a studio session that I produced with Fred and John Badanjek from the Detroit Wheels. It's really some sweet stuff, man. I mean it's really some spaced-out stuff.

One song that Fred and Johnny B and me did together was "Space Age Blues," and then we've got this untitled instrumental thing that we did together that's not a rock tune at all, it's space city. Fred plays some of the FINEST guitar chords on this thing that you've ever heard in your life. It's a three-piece band but the way we recorded it, man, it's so WIDE, the sound of it.   I really enjoyed playing with Fred. Fred was not a real director -- he was but he wasn't really strong at it. Fred was the most relaxed character on Earth. He was like the opposite end of the world from me, personality-wise, but we had a rapport together. We were buddies, we had motorcycles and did a little riding and stuff down in Detroit, going to Greek Town and running around and hangin' out with some buddies of mine that were into the motorcycle/hot rod thing in Detroit. Harry Phillips was with us, the piano player out of the Detroit group. That whole thing went on for about three or four years, just kind of in and out of things, jamming a little bit and a couple of gigs. Then Fred got Scott Morgan involved in it, and then it took off a whole lot more after that, and it was a lot more serious kind of thing about it. We started rehearsing a lot and doing a lot of gigs.

SCOTT MORGAN: All these bands were breaking up around the same time, so there was all this talent around Detroit. I'd always liked Ron as a bass player, and we got to know each other really well, so he was a natural for me and apparently for Fred, because he went and played with Ron in the first incarnation of Sonic's Rendezvous Band, and it was just kind of a joke, I think; I don't think he was ever serious about the name. It was just sorta like, "Well, I'll just have this band, Sonic's Rendezvous Band, and we'll just play some gigs in a bar somewhere." Fred was driving a taxi, and he was living on the west side of Detroit with his wife Sigrid [Dobat], and he was doing this little lounge gig with Ron on bass and there was another drummer, I think it might have even been a revolving line-up.

Then Fred and I went to California for about a month. We drove out, drove a driveaway out and back. We were trying to cook up some business, because Detroit was never real strong on music BUSINESS. There wasn't any big-time movers and shakers here. There was one agency called the Diversified Management Agency, DMA, that was pretty big, but that was pretty much it, I think. So we were kinda looking for some connections. Networking, I guess.

We talked to this guy Bennett Glotzer, who was the business manager for Blood, Sweat and Tears. They had made me that offer that I COULD refuse [in 1968, to join the band, replacing Al Kooper], and I did. They called me back several times after that and made me offers, which I turned down. I think by the time that we got there, they'd heard enough...they weren't that interested. They were MILDLY interested; they said, "We'll find you a place to record if you wanna make some tapes for us, and maybe we can do something." But we didn't stick around. We stayed a few weeks and went back to Detroit.  Terry Trabandt was living there [in L.A.], and his girlfriend moved back to Michigan, so he gave us his apartment. We were sleeping on the floor, we had a turntable, like a portable turntable, and we put that on the floor. We had a bunch of Beach Boys records; we just played Beach Boys all the time. Sleeping on the floor, had no furniture, no cooking utensils. It was really primitive.

I played this gig with Iggy and Ray Manzarek and James Williamson at the Hollywood Palladium. See, James Williamson lived in the same building, the Coronet on Sunset and La Cienaga, right next door to the Hyatt and the Comedy Store. It's something else now...expensive condos. I was playing harmonica. Iggy asked me to play harmonica, and on the day of the gig, I locked the harmonicas in the room, and they had come to pick me up. So Iggy went out onto the balcony and jumped from one balcony over to my balcony to go in and get my harmonicas! We're on the third floor, and I'm going, Whoa! This guy is OUT THERE! He's really dedicated! "I'LL get 'em!" And we're going, "Oh, my God," and it was so bad.

After the gig, I didn't have the key to get into the room, so I kicked the door in, and that's why we had to leave. The reason I kicked the door in was because the person across the hall had gone and was locked out of their apartment, and they tried to go through the air shaft and fell four stories into the basement! So this girl who lived there, whose roommate had fallen, had forgotten HER keys and she was gonna do the same thing...she was gonna crawl into the kitchen window across the air shaft, and Fred kicked HER door in. The whole thing was insane!

Back in Michigan, Smith and Morgan linked up and prepared to re-enter the band wars.

SCOTT MORGAN: When Fred and I decided to try it again, we kept the name [Sonic's Rendezvous Band]; I said, "I LIKE that name!" He didn't like the name; he thought that it should be a BAND name, not have his name involved. He wanted to call it the Orchids. And so we did, for one gig, and there was a blizzard. We had rented this ballroom at the Detroit Cadillac Hotel and NO ONE showed up, 'cause there was a huge blizzard. We had rented a P.A. and hired a local deejay Dan Carlisle to spin records, and we had hired Terry Trabandt to play bass, I think Jeff Vail was playing drums at that time, and Jerry Hopkins, a saxophone player was playing with us. And NO ONE showed up. There was a poster made up; Fred's manager Chato Hill made this poster up, and I still have the poster, but we decided after that gig that it was not to be...we should keep the Rendezvous Band name! It was cursed! It was DESTINY! After that, Terry got out of the picture, and Ron [Cooke] came back on board. Jeff Vail stayed around for a SHORT time, not too long. We had another drummer for awhile, Mike Martinez, for a little bit, but that didn't last very long either.