Written by Robert Brokenmouth on 12 February 2020. 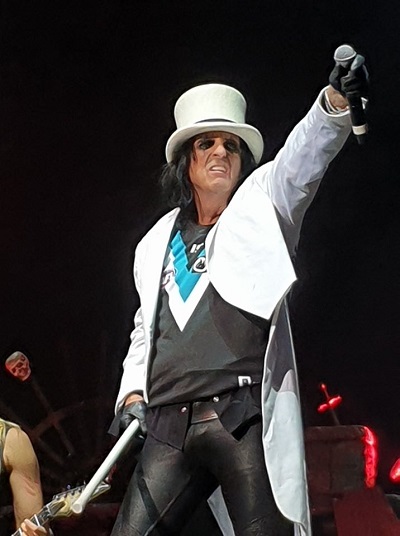 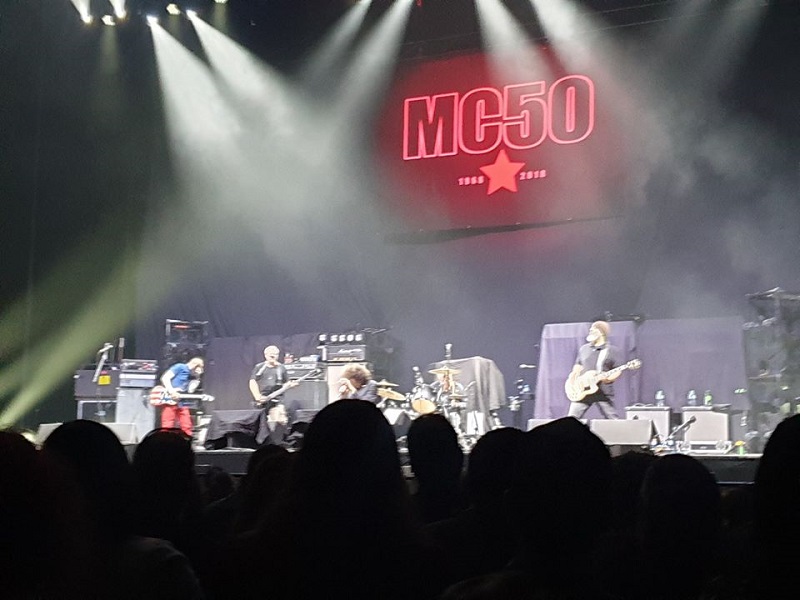 Wayne Kramer (left) leads the MC50 through their paces.

Now, that's a fuck of a lot of rock'n'roll tropes. And let me tell you, every single one of them was on display tonight. Some of them, several times.

But let's be clear. This was a crowd-pleasing night. Old scrotes who know the score know that Alice having the MC50 open for him is a kindness, but also intended as a bit of an education. Having Airbourne on next is ... well, they're what rock'n'roll is thought to be (even if it's not), and Alice ... well. He's got one fuck of a tight, kick-arse rock'n'roll band.

This is gonna be a short review, and because the leaping lizard next to me stole my phone, all the pics are going to be the fuzziest things you've ever seen.

See, rock'n'roll isn't just about ghastly dives and curry vomit and poo and wee in doorways, it's about the theatrics, the bombast, the complete and utter bullshit braggadocio while you lose yourself in a great amorphous mass and pretend you're an individual just like the folks troping and gurning away up there in the lighted section. You, there in the dark, are either going bonkers (she's got my phone my god it's not gonna survive) or getting quietly blotto in faded old fart memories like that wonderful pair of jeans you once had which your mum threw out because they had a few holes.

Moving on. Wayne Kramer has put together a bunch of musicians as MC50 to re-present the MC5's songs as, I guess, a tribute. Wayne himself looks to be full of speed - but as he's still alive while almost all of the 5 are gone, I can only assume it's a natural internal, weird energy. Which he should market, cos I'll buy some. Better than the SC5, and the DTK gig I saw in Adelaide where I reconnected with Renestair EJ of Bloodloss (he punched me once he remembered me. Fucking hurt, too, scrawny sod) and saw Evan Dildo fuck up “Looking at You”.

What a pleasure to see them. Really. I mean, you can't go back, and frankly, I don't want to be five-years-old again anyway. Kramer has a point about America. People are watching. Trouble is, not enough is happening to fix the joint. Because people don't think they can.

Fast forward to Alice Cooper's “Department of Youth” (in particular) and I find myself pondering how it is that the most astute political observer of his times also happened to be in a rock'n'roll band ..and that now, while his songs still may have relevance (if heard), the context is long gone, and any social and political momentum by Alice or the Motor City boys has long since been consigned to the dustbin of history.

Now, it's only entertainment, rock show and so on. 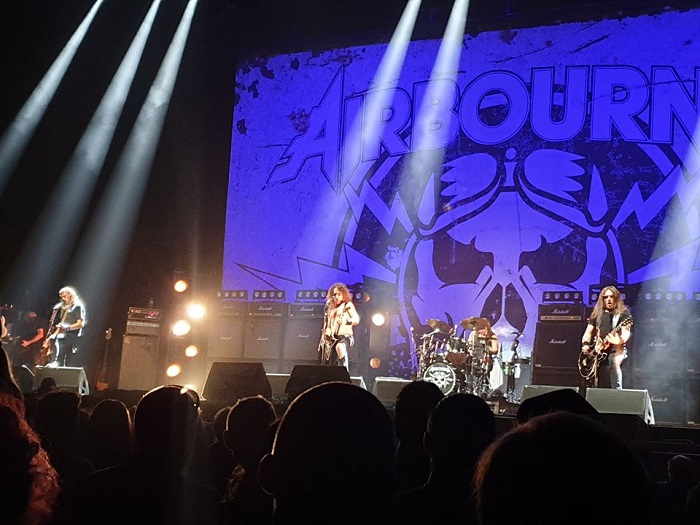 Airbourne, I watched the roadies set up four double Marshall stacks for each guitarist and roared my arse off laughing. I came back from shanking Armitage and laughed at the posing, the absurdly shaped guitars, the pointless running about, the not-very-good songs and all the AC/DCness without the songs...and then...I found myself having fun.

I'd forgotten, silly old fart that I am, that rock'n'roll is supposed to be fun. And stoopit. And Airbourne are stoopit. And they have the most ridiculous sense of self-belief, they'd have to, all that heaving about they do. Insane. The topless guitarist with the really bad hair hopped a few seats into the front row and took off, perspiring overweight roadie heaving along behind. Cruel, really, as the
guitarists are all in superb physical condition. Anyway, he ran to the folks in the standing section, let them fondle his sweaty torso (ugh) and scampered back, roadie rolling along behind.

I'm sure only about four Marshalls total were actually turned on, and that the bass player will, with all that head rolling, provide jobs for many impoverished chiropractors for decades to come. (ED: Impoverished chiroprator? I never!)

They won me over. A few good songs. But, their utter belief in themselves, the sheer energy and imbecility of what they were doing (sorry, chaps, couldn't hear a fucking single lyric, so if you're T.S. Eliot, I just didn't hear it) simply won me over. Half-way through I'd stopped laughing, by the end I was loving it. A spectacle!

I should add I once saw the Living End and didn't stop cackling through the entire show, finding them to be pompous self-satisfied twits. Airbourne (with their daft logo with a skull with a parting in the middle of the hair with an 'i' in the middle of that - jesus, does the 'i' stand for 'information'?) and preposterous 16 Marshalls (probably four of them set to “2”) and their energetic Ackadackaishness, are simply older boys who don't know better, and that is entirely in the spirit of rock'n'roll. 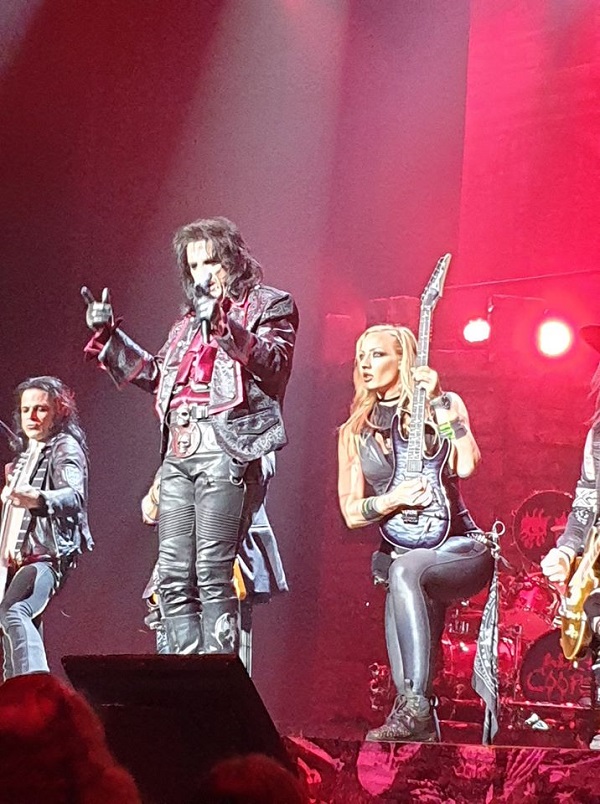 Alice Cooper. What a fucking band. Last time I saw a band with three guitarists which worked, was Garry Gray's band, the Sixth Circle; it's a difficult sound to choreograph.

Alice's band are super-tight, fit beyond anyone you know, and have a sense of humour and camaraderie which overflows from the stage. They love their job, too, and they love Alice, whose deadpan, stupit sense of humour leaks like babyshit from your grandkid's nappy.

This is his band; look 'em up:

There weren't as many tableaux as I expected, but really, far from being “metal Alice”, this was so like a farewell tour - he seemed quite emotional, in fact. Love was shared, amongst the glitter bombs, blood and ghastly frocks. 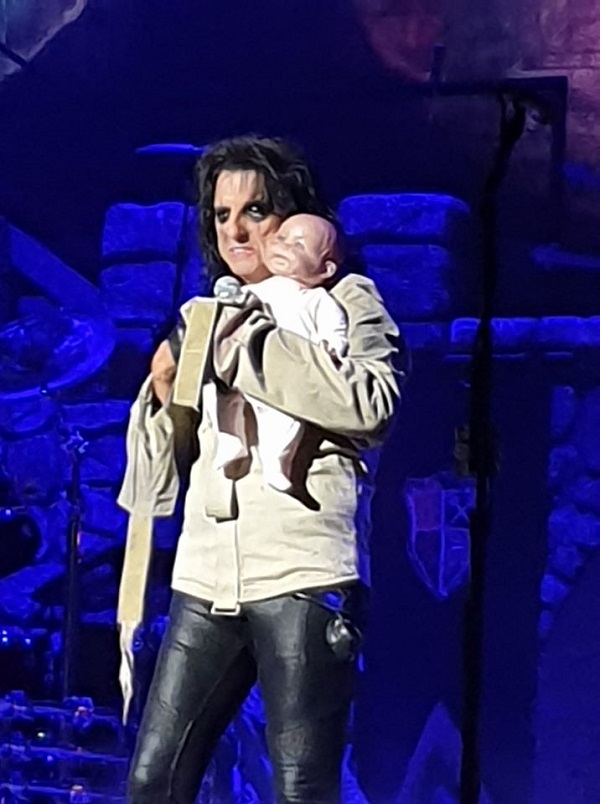 Is that a dead baby? It can take care of itself.

Set list was interesting, some not as familiar, nor as familiar live - what? No, I'm not telling you. And don't you be going to check, either. (ED: It's here if you insist.)

Speaking of a different sort of dick, Adelaide singer and splatter film maker Dick Dale was there, regaling us with stories of the time he was on Alice's crew and got to pack up the guillotine ('stop hopping about, Dick and get on with it'). Dick Dale hosts the Trasharama film festivals, check him out on FartBook, and demand T-shirts or just give him money so he can finish his next film (Spencer P. Jones appears in it, so you know it's gonna be good). 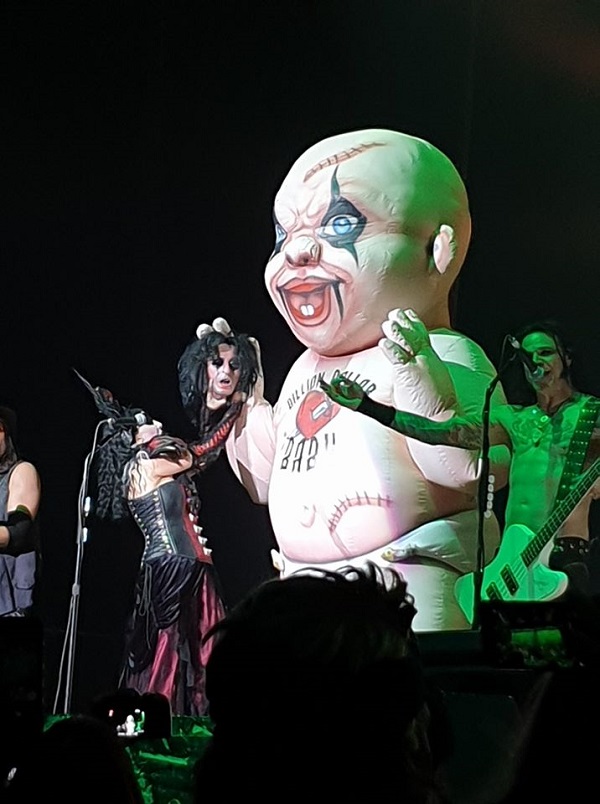 But what can I say?

Do you love rock'n'roll?

Or are you the sort of dweeb who buys Hard Rock t-shirts and thinks that makes them rock fans?

Hard Rock? I thought that was for wankers. Should be called Hard Sock, eh?

Stop me, Barman, I'm enjoying myself.