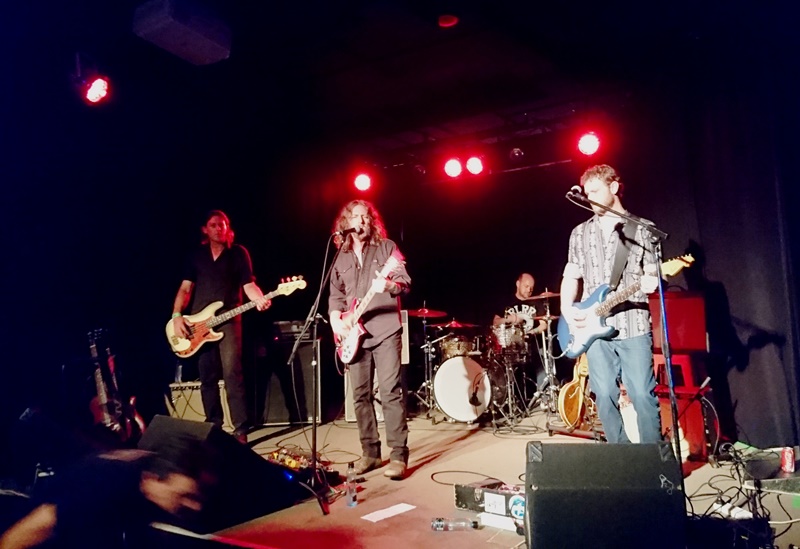 In an alternative universe where justice prevails, Leadfinger would be spending their Friday night cranking out a two-hour set to a packed Hordern Pavilion. Five-thousand sweaty people would be singing along to every word of every song from their newest - superb - album.

Instead, they’re middle-of-the-bill and out front of a half-full Factory Floor in Marrickville. And the thing is, to watch them and to listen to those brilliant songs played with such passion and fire and love, you wouldn’t know the difference on stage.

This was only my second Leadfinger show. My first was at the Blood Bank Benefit for Mick Blood in 2014. I’d heard of them but not heard them. I spent the next 40 minutes standing there with my jaw on the ground going “Who the fuck are these guys and where have they been all my life?” Now to be fair, I had waged a blitzkrieg on sobriety that day and only remember general amazement, and a scorching cover of “City Slang”, but I blabbered about them for ages to everyone I spoke to in the real and cyber worlds.

Tonight I had three light beers and drove there and back, partly to prove a point to my wife and partly to remind myself why I don’t do that when I go to gigs. But it mattered not, as Leadfinger took to the stage and proceeded to own it.

Having bought “Friday Night Heroes” and played it to death in recent months, I was expecting a killer show. I wasn’t disappointed. The drums kicked off “Champagne and Diamonds”, then Stewart Cunningham’s guitar edged itself over the bass, and one two three BANG they were away.

Basically they played nine of the album's 10 songs, and while I love “Appreciate”, I appreciate why they didn’t play it on the night. We got the rest of side one of the album in sequence – "Heart On My Sleeve", "Mean Streak", "Bite My Tongue" and "Raining In The Dark". I must admit I’m having trouble believing Stewart has a mean streak, no matter how emphatically he proclaims it. They powered through the first two of those and cruised effortlessly through the next couple. All killer, no filler.

One treat for me was watching the guitar changes and hearing how they affected the sound – Stew moving from the Les Paul to the Rickenbacker 12-string, Michael Boyle on the 335 or a Strat. Everything from crunch to wail to jangle to clean and often within the same song. Well not the guitar changes but you know what I mean.

The rhythm section of Adam “Reggie” Screen on bass (celebrating his birthday) and Dillon Hicks on drums were rock solid. I mean, Rock Solid. Power and punch where it was needed, then back to first gear if need be, but always just motoring along, an unshakeable foundation for every song. Michael Boyle’s backing vocals were absolutely incredible. He and Stew work so well together on every level, vocally and on guitar, they put Leadfinger a league apart from other local rock acts I’ve seen in the last few years, and puts them up there with the best. Judicious use of effect pedals added plenty of colour and depth to the guitars.

Stewart announced they were turning the record over and it was on to side two, which ran in a slightly different order to the album, starting with the rock assault of "The Man I Used To Be", one of the many songs on this album I relate to personally. Probably their best rocker of the night? That chorus certainly kicked out the jams.

Afterwards came what I like to think of as their Thin Lizzy moment, the title track "Friday Night Heroes". It’s got that classic rock elegiac feel to it, and it’s quite the rock epic. I suspect these guys have a sneaking – or blatant - love of a few Oz/Classic rock artists, and I have to say this one makes me think of Richard Clapton’s "Goodbye Tiger" or "Deep Water" – songs that tug at the heartstrings, about playing music and/or living in a different age to the way things were when we wuz young. They totally kicked this one between the posts, and followed up with the one-two punch of "Older And Wiser" and "My Own Road". By this stage they were really firing and then suddenly it was over.

Go and see Leadfinger any chance you get, you’ll be seeing one of the country’s best bands playing some of the country’s best songs with fire and passion, wearing their hearts proudly on their sleeves. A terrific night. I came home with two t-shirts, one 7”single, and one set list better off than I left with, saw a bunch of friends, and watched a great band. A really excellent band.

OK. You know I’m going to end this way don’t you? You know I have to?