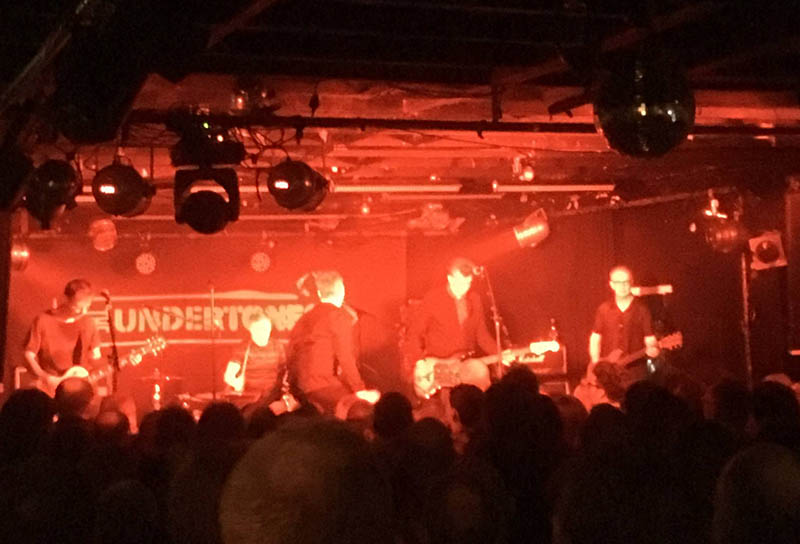 Opening support band to The Undertones in Adelaide, The Green Circles ,were good - but as I was preoccupied rescuing my keys from inside my car with the help of the RAA, I only saw the last half of their set. They seemed a little awkward tonight. The Green Circles are well and truly superb, however, and if this was a slightly off night for them, I’d better see them again to make up for it. Find them on Facebook and get their cds.

Next support, The Systemaddicts, are on Off the Hip in Melbourne, and they are one exciting, involving, often very amusing band. You don’t really know what you’re missing unless you’ve seen them. Fucking brilliant.

The Undertones, The Systemaddicts, The Green Circles
The Gov, Adelaide
July 9, 2017

Liam, the guitarist with the packing tape around the strap nodes so the damn guitar doesn’t fall off (again), runs around like a blue-arsed fly, tending to everything and deliberately knocking aside his hapless brother, Rory the trombone player. Tonight he had his head down and often head-butted Rory - at one point shoving him right across the stage with his head - oh, still playing of course.

There’s not a lot of room on that stage, with two damn kits cluttering up the place, but Liam makes the world his own - and you love him for it. Find the Systemaddicts on Facebook and buy their three CDs.

It was a bit of an accident, me going to the Undertones. I’d missed out on being able to interview the singer (Paul McLoone) due to prior commitments,  which was a nuisance as I wanted to ask how you went from being an award-winning radio presenter and producer to boinging about the stage with a fuzzy pop band.

But that’s not all. McLoone has been singing with The Undertones for 18 years - more than twice the time Feargal Sharkey, the original singer recruited in 1975 by the already-formed Undertones - O’Neill brothers (guitarists John and Damian - John writes the songs), Billy Doherty (drums) and Michael Bradley (bass). 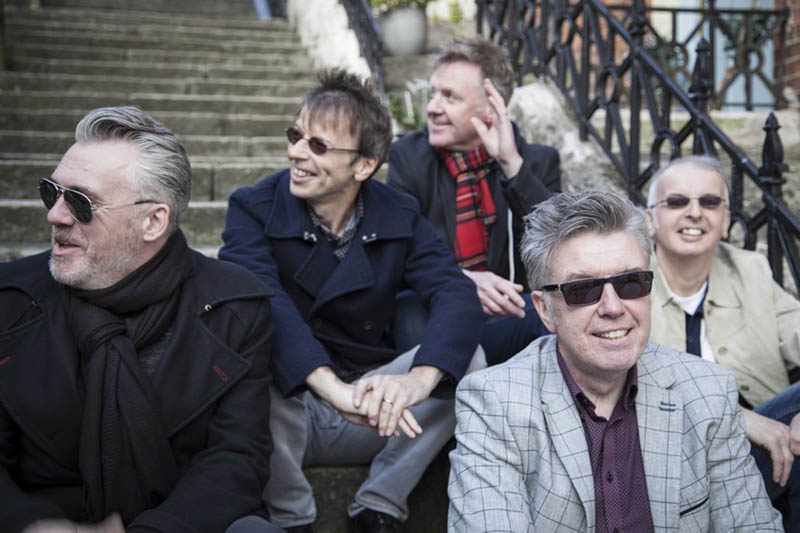 And here’s more. McLoone has bags of stage presence, and sings and performs just as well as anyone you could name. You’d think it would be hard to find a singer with the style of Sharkey - but apparently not. McLoone - well, close your eyes a minute (if you can stop watching him bounce about the stage) and there’s that magical voice. The band have no business looking so bloody young, is my first thought as they run out onstage. Where are the usual hallmarks of ‘first stage punk’ bands - the baldies, the beerguts, the general slobbery?

The second thought I have is the wonderful camaraderie between them. Like The Troggs, they have every right to be rather stand-offish, if not snotty. And we’ve all seen these retread bands be like that. Yet, no, like The Troggs, they’re relaxed, playful, still enjoying these classic songs. And this tour seems to be like a ‘we’re here to remind you of us’ thing - there’s one new song and it fits in nicely - they could just as easily played an entire set of excellent new material. Of course I went home and listened to the two noughties’ LPs - they’re so damn good. I’d argue, in fact, that they’re as good if not better than some of their earlier work. Fabulous!

And then there was just a rollercoaster of fun, smart, involving pop songs. Not in the same area as the Buzzcocks, who have a harder, more skronk edge to them live, the Undertones are that wonderful thing - a band with great songs, who know how to get a crowd going, even on a blizzardly winter Sunday night in a small town which can’t always keep the lights on. The band did indicate that this is the furthest south they’d ever played - they should play in Taswegia, one wit called, and another added, go to Hobartia.

There were a few breaks in the songs, and the knockabout wit of the band simply added to the spectacle. Their accents, too; instantly reminded me of a Sunday morning at Scruffy Murphy’s in Sydney, where we beheld a party of five young expat Irish (all knees, elbows and huge ears) blathering away and having a fine time - you might’ve figured out one word in seven, but they were speaking English. Well, something like English. They were having a completely fantastic time together.

But that’s the thing isn’t it, the English managed to shove all the country’s original tongues into the hinterland - the two gaelics, cornish and welsh. So when you visit these places it can feel like a foreign country… maybe it’s not that Ireland or Scotland or Wales are the foreigners, but the English.

Sure, you can hear The Ramones (first edition) in the Undertones’ songs, but really - what you’re hearing isn’t just The Ramones but the Undertones’ own pop sensibility, honed by years of listening to shitty radios beneath the bedclothes when the old folks are supposed to be asleep. So while The Undertones appeared to fit right in with the punk/ new wave explosion from the tail end of ’76 to ’79, the truth is that first, the media and the audiences were a little ‘over’ fast-paced guitar bands and were looking for diversity - because that’s what happened - the explosion of new bands were suffuse with difference and variety.

And that made continuing as a band, without repeating yourself too obviously, very difficult indeed. Not only did you have to be one step ahead of expectations, what you did in that heady time between 1977 and in 1984, had to be excellent. Not everyone could manage that - and thankfully things are very different today. 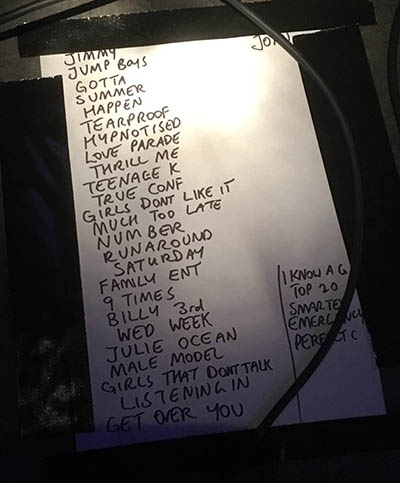 The Undertones are and were a power-pop band, somewhere between (say) UK glam and Phil Spector with a guitar buzz - never mind their intelligent lyrics and pertinent observations, humour and genial brilliance. Never mind John Peel’s love for the band (God Bless John Peel, say I) either. Affection for this style waned at the time, and while the band realised this and aimed their last LP towards new horizons… it didn’t quite take.

So, downhearted but determined, the O’Neills formed a more confrontive band (who I confess I’ve never heard properly - only five LPs and loads of singles, God I’m ignorant) That Petrol Emotion (they’re from Northern Ireland, and you write about what you see) and eventually returned to the Undertones. Because, as I understand it, they were asked.

Stop here a minute: I can’t understand why people who were around for the sixties don’t investigate the fifties or the seventies and eighties more often. It amazes me, it really does. The Sonics were a sixties band who - on a global scale - most people had never heard of back in the day.

These days they’re revered by the garage band enthusiasts. The Troggs, like The Animals, these days do what they have always done - play entertaining rock’n’roll in small clubs. And The Undertones, strangely, overlap more into Troggs and Animals territory than the Sonics - both musically and onstage.

Yet on Sunday night I saw very few people who went to see all of these. Yes, I know people complain about ticket prices ‘these days’. But a local stamp was 18 cents in 1979, and many local gig prices were between two and five dollars. Do the maths, and we find that local gigs should cost (not free, there’s an entrance fee) between ten and twenty-five dollars.

Personally, I look at what I’d be prepared to do to see ‘xyz’ band. I don’t give a rats about the genre. There are no fucking genres. Only decent musicians and music. And that’s how punk both became bogged down in stodge and standardised outrage, it stopped looking for more interesting things to listen to.

So The Undertones (lumped with punk for convenience and attitude) came and boy, was their set good. So many hits - or songs which should have been hits. One woman I spoke to afterwards said she’d never heard them before and loved every minute. McLoone introduced the last part of the set as the entire first ep, assuming as he did so that not one person in the crowd would have a copy - a fair assumption as the thing came out in July or so 1978. ‘Everybody hates an emergency case/ uh-huh’ must be one of the great rock’n’roll lines of all time.

At the gig were some of my favourite people to be at a gig with - Col Howcroft, Suzi Ramone, Jeremy Tomahawk, Robert Dunstan and Paul (who does own a copy of that ep). I never thought I’d ever see the Undertones - ever - though I must say that I was rather unaware they’d released two new LPs in the last few years ("Get What you Need" and "Dig Yourself Deep"). We in Australia - not to mention the hordes of bands - really suffer from not having a centralised physical music press like RAM or Juke. You never know anything until it’s too late, or you find out something has been happening for years. Dreadful.

Anyway. Keith Claringbold put up their set list for Brisbane - befriend the bugger on Facebook and take a peek. Mind you, in Brissy they were joined by Ed Kuepper on a cover of "This Perfect Day" - and you can definitely hear the Saints influence on the Undertones - and, I think, in That Petrol Emotion (now that I’ve given them a listen).

The Undertones. Gawd. They were fucking great. I can only hope they come back again - if not, I’ll have to visit the disgusting UK again.