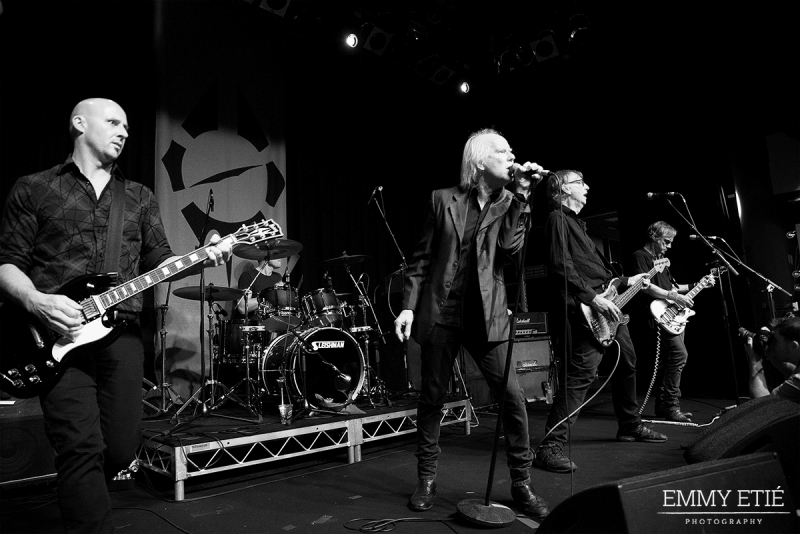 The Corner Hotel in Melbourne oozes rock, and the idea of being part of Radio Birdman, HITS and Penny Ikinger shows over two nights was worth the flight from Sydney to Rock Mecca.

I choose to be in Sydney for the Rowland S Howard tribute show Pop Crimes on the Saturday before so I missed Birdman’s Manning Bar gig.

Sitting at the airport, fuelling my thirst of adventure and drinking my Coopers while reading social media, I noticed that my Facebook feed was inflamed with reports on how well Birdman played the night before in Brisbane. Comment was made that it was so powerful and melodic. 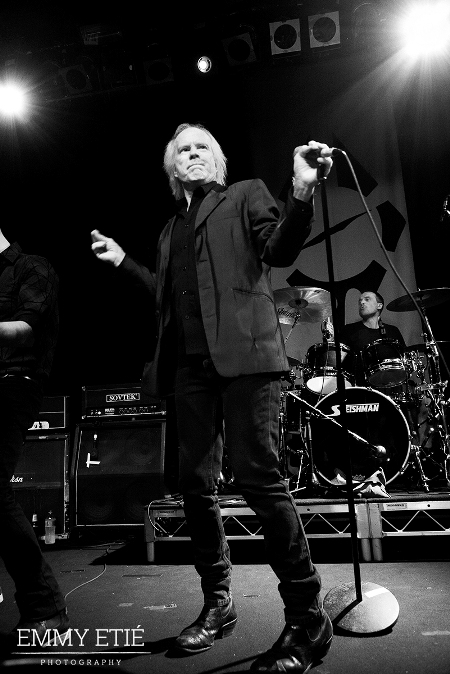 All photos by Emmy Etie

It is a very strong line-up, so I was on with a high with guns blazing. Not since Hunter S. Thomson loaded his red convertible and headed to Los Vegas did anyone have such a mission. Six hours later I was in The Corner hotel with another beer in hand.

I am aware of Penny Ikinger but I actually had not seen her live since I was kid and when she was in the Wet Taxis back in the mid-‘80s. I like her videos, yet still had not heard one of her albums. Even so, I knew, I would like her live.

I did. Penny wanders on stage with a motley crew, observing the sparsely-filled Corner Hotel. It was an interesting looking band, from her left a guitar player who looked to be straight out Sunbury to an ultra-cool Gen Y bass player. At the centre is Penny, sporting her Messacaster with a range of picks-ups chiselled into the battered aqua-blue body.

Mostly, we are rewarded with tracks from her latest and critically-acclaimed album “Penelope”. It is layered and works with repeated, solid haunting riffs. Penny’s guitar playing is a complex mix of influences – some Sonic Youth art noise, Rowland S Howard, and blues over a solid framework of a repetitive rock bed of the bass and the drummer, Then, there’s her fragile and at times dark, whispering and husky vocals. It is certainly interesting, and all times strong. I will check her out again and pick up her album.

HITS have been making their down pilgrimage to the Holy Grail, Melbourne, for close to three years now. Even a year ago, their fan-base was still a small but dedicated following. This all changed with the release of their latest album. There some who even believe they are a new Melbourne band. More fool them - they are BrisVegas’ finest.

I was told that at The Corner everyone comes late; this was not the case for HITS, as the venue was almost three-quarters full on both nights they when the curtains were raised for them. This was going to be a “take no prisoners” set.

This is maybe my 20th time seeing this band and they rarely disappoint. Running through tracks mostly from “Hikikomori”, they open with “Jesus F Christ.” The set followed with three intense high powered rock songs but it’s the slower ones that work best buy taking the mood down to hard rock swagger. “Disappointed” is Richard (Evil Dick)’s time to take control of his crowd: I realise he pulls off the drunken Bukowski-crossed-with-Mark E. Smith rock fuck-up stage persona to draw the crowd in. In reality, he is a supreme showman and one of Australia’s best. Tonight, he is taking control, chewing up and spitting out his audience. Then, he takes the set into darkness with a powerful version of “Bitter and Twisted.”

It’s a powerful and loud Corner mix with the twin guitars of Tamara and Stacey counter-balanced by their near perfect backing vocals and harmonies. Working off each other with Tammy exploding with Riot Grrl via Detroit lead guitar lines that are never flawed.

It is the rhythm section that I’m really focused on for this review. Bassist Andy Buchanan is like an oak tree, powerful, and really very melodic. He is restraining, yet keeps such a solid powerful melodic bed to the songs. With drummer Gregor Mulvey out of action for this tour with a broken ankle (and his powerful swing is such a part of the overall HITS power),  Peter “Booges” Werth stepped up and did a remarkable job with half-a-dozen rehearsals. He is from the Keith Moon school of power drumming, hard-hitting and solid. Some songs it was perfect. Maybe on others, Gregor was missed. That said, it was an awesome effort.

“All My Friends” was the rhythmic highlight and still my favourite HITS song from their debut album;  the first night it was played way too fast but on the second, it blew me away. It was slowed down, played with groove and with Evil Dick really exposing his classic rock vocals. This perfect six minutes was worth the admission alone. HITS were in top form.

I have maybe seen Radio Birdman 15 times since that secret warm up for their first reunion shows at the Manning bar in December 1995, and along the way, maybe, I sort of lost interest. It was no surprise when they called it a day in 2008. I felt maybe it was getting tired. “Zeno Beach” was a respectable affair, solid with a few gems, but It sounded like a New Christs album with Deniz Tek on guitar. Maybe that’s unfair, but then the New Christ’s are such an amazing band so it is really a compliment. 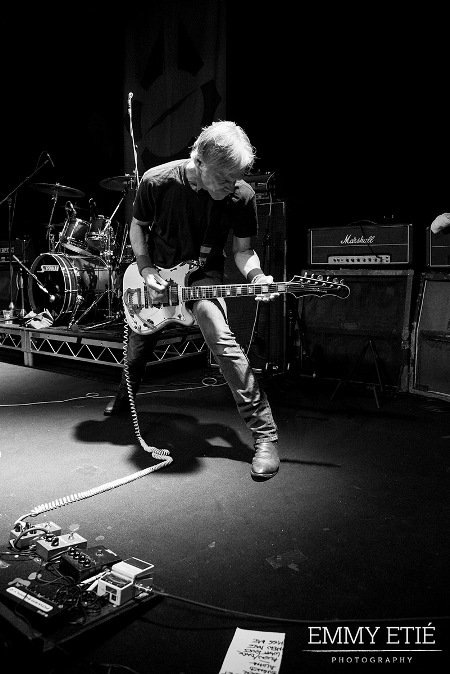 I always believed some of the most powerful moments when I heard Birdman songs being played was actually when they were NOT delivered by Radio Birdman. For me, The Deniz Tek Group with Kent Steedman version of “What Gives?” was more blistering. The Tek and Younger show at Dig It Up, I believed, delivered the best version of “Aloha Steve and Danno” that I had ever heard live.

Finally, a year ago when Deniz played with a stripped-back four-piece with Pip on keyboards, I noticed it was the Birdman songs that shone.

I remember thinking, that I’d never realized what an accomplished player Pip Hoyle really was, as he soared and with extended solos and pushed the melodic edge, That night, “Breaks My Heart” became my favourite Birdman song and I revisited “Living Eyes”, really listening to it again with its melodic complexities. At the end of the day a band is one thing, but it is the songs that are timeless.

Here it is, the band’s 30-year anniversary and a long time since Rob Younger and Deniz Tek shared a rundown Darlinghurst house together and started writing songs. It really hard to fathom how really talented Deniz Tek is. That so many of these songs were actually written when he was only 21-years-old with their intricate and well-crafted guitar lines underpinning Rob’s vocals.

Tek is one of the best hard rock players to emerge from Australia, mixing melodic Dick Dale surf guitar with the garage intensity of Ron Asheton and Fred “Sonic” Smith to deliver an original and unique style. The band itself is one of the top ten influential bands to come out of this country. They put a stamp on the “Sydney Sound” of the ‘80s. From Midnight Oil to Died Pretty to the Celibate Rifles, countless bands have given a nod to them.

The curtain raises the band piles on and Younger gives a smug curtsy. “Smith and Wesson Blues” opens – lyrically, one of their strongest songs from their first EP. The band is blistering, the mix clear and powerful; it’s immediately followed by “Do the Pop”. There is an intense push forward as the recognisable gems are played one after another and the moshpit assembles, with boys wanting to expose their full-on, alcohol-fuelled rock credentials. They run through almost all the songs from the first three albums; played with precision and with amazing tightness for a band that has been out of action for eight years.

The rhythm section is mind blowing. The solid framework of Gentleman Jim Dickson and Nik Rieth is one of the best in Australia and never overplays. It is simply has guts.

The new bloke, the New Christs’ main axeman, Dave Kettley must be a fan of the first EP. The Birdman guitar attack is closer to that early 1976 sound. With Tek’s guitar pushed up in the mix and Dave’s solid power chording, with the odd solo cut in by Kettley, it works and they play more within the rhythm section. It is actually more powerful - especially for the more straight ahead garage rock songs like the 13th Floor Elevators cover “You’re Going To Miss Me”, “Hand of Law” and “New Race.” Sure, at times some of the rock duelling was missed, but it was compensated for with a more straight-ahead, melodic sounding band.

Finally, it is the songs off “Living Eyes” that really seem to come alive. This was an album that was criticised for being too cluttered and lacking space. Songs like “Crying Sun”, Eskimo Pie” and my favourite. “Breaks my Heart” is sparkling, fresher and certainly more melodic. These songs sound closer to the remixes that are found in the box set. It appears the change in line up was more an artistic decision, as much as a personality clash.

Tonight’s highlights really are the difference between Birdman of the Paddington Hall of 1977 and The Corner Hotel of 2014. They’re Pip’s keyboards on “Man With Golden Helmet”; they can breathe and soar they and are not fighting against the twin guitar attack and the duelling hard rock hysterics. That was because ex Birdman Chris Masuak had emerged over the years as such a supreme player in his own right, it was difficult for such talent to sit back and just play rhythm, and in many ways, it was a waste if he did, did it suit the songs? Not always.

The other highlight was Rob Younger. The voice changes over 40 years as you grow from a 24-year-old kid to a man of 65. Sure, he might not be as powerful or his bellow as aggressive as it was and the “Yeah Hups” are not as loud, but with age his vocal texture has become deeper with more solid resonance and warmth.

I know the odd person who will slag of the 2014 tour simply because they have an axe to grind. They are simply a personality group. Anyone who studies marketing understands that: the 10 percent rule. The 10 percent who, when they are not watching Big Brother, will find fault with everything.

Those who are getting online, and then whining and creating drama, or writing letters to editor of the Telegraph, and then ringing talkback radio. One week, their issue could be Chris Masuak and the minor controversial not being in this line up, or the following week they could be online complaining about the minor price hike in petrol. They are like that awkward uncle, with his repeated stories and Sir Les Patterson appeal we never talk about, and who makes un-welcome appearances at the family Christmas Party. In reality, the ticket sales were testament with almost all the shows sold out and heaps of kids seeing the band for the first time. Hail Birdman for keeping the flame alive. They were revitalised on this tour and back at their best.