Sunn0))) and Magma at the Adelaide Festival

Written by Robert Brokenmouth on 13 March 2016. 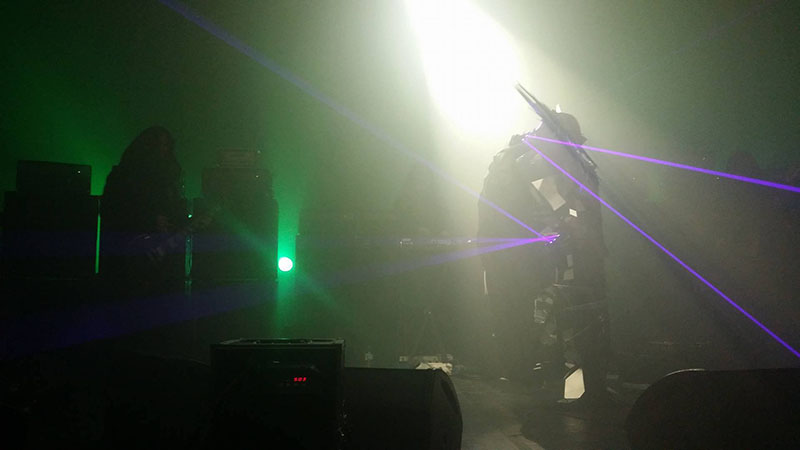 It’s one of the last couple of nights of the Festival and Fringe; Womad is grooving away in Botanic Park, hipsters are growing beards, diners are admiring themselves and magician James Hessler is befuddling everyone else. Crowds are flocking like pigeons in one of Godspeed (etc)’s fillums.

Over at Thebarton, we pick up the tickets and plunk ourselves outside the door. The beefy bouncers all wear yellow shirts and clutch industrial strength earmuffs. After about 40 minutes we scurry in, straight to the interior entrance, for another 30 minute wait, and a $12 plastic cup of cider (our last, at that price).

Most of Magma - Tomway Armie photo

Sunn0))) + Magma
Thebarton Town Hall
March 12, 2016
Photos above and on earlier page by Tomway Armie
Photos below by Nick Spaulding

The doors finally open and I head straight for the front of the stage, where the still-sticky crowd barrier is also still unnecessary. There’s no way anyone can slam or stage-dive during these bands. After another 30 minutes, bang on time, David Sefton walks on stage, casually dressed, and thanks us for coming. This is his last night as Festival impresario, and over the last few years we have much to thank him for.

It’s very clever of Sefton to put Magma and Sunn0))) on the same bill. First, both use aspects of opera (albeit rather different aspects) and second, they present themselves in completely different ways.

Magma are on first, and for a band so hugely beloved of the underground, this is a magic, impossible moment in itself, as well as being the band’s first in Australia, ever.

Hervé Aknin, the centre mic singer, is the focal point, but Magma itself are very much their own elemental creation. Two female singers, Klaus on vox, bass, guitar, drums (the drummer/founder Christian Vander has the most astonishing vocal sequences, he’s a natural scat singer), keyboards and … vibraphone/ xylophone. With that last instrument alone, you would be forgiven for squirming. However, the eating is in the pudding or something and Magma are - no other word for it - magnificent. 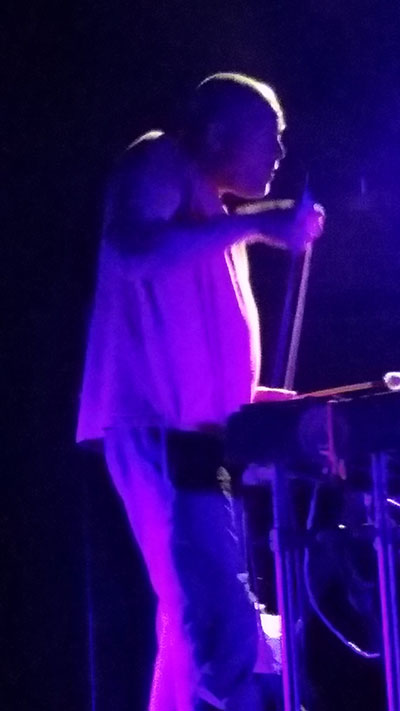 Magma’s music is at once simple and complex. Ripples upon ripples. There are songs with distinctive chugs but, unlike the usual chug, where everyone pounds on the rhythm, here the vibes and keys dance around, highlighting first one aspect, then another, from one musician to another. Most of the time you don’t know where to look, there’s so much going on.

Everyone is so locked in this band. They love what they do. It is a delight. It is evident. We love them more and more, excited by their musical wit, moved to occasional tears by their pathos. The vocals display aspects of opera and theatre, and I would hesitate to describe what Magma does as rock’n’roll.

Ankin sings partly in German or something similar, but frequently in a language which … isn’t an actual proper language. Yet - and here is where things get a little scary - such is the eloquence of his performance and delivery, we reach an understanding or comprehension. No, it’s not entirely clear. But the emotions are, and we react. Extraordinary.

To Ankin's left, the two gorgeous ladies show their big operatic range - yet such elements are used sparingly, and with great effect. And the same goes for the other musicians. Very much, less is more. The bass player, for example, could be constantly flinging out complex chords and note progressions like Mike Watt, to the detriment of the songs. Timing is critical with Magma, and we stand, mostly stunned. Christian's drumming is so good… oh, god.

By the end, the man looks like he’s been dunked in the deep end. Soaked in sweat. So much emotion has been emanating from him as he performs, it’s tiring to watch. Complicated patterns seem to flow like a river. His facial expressions, his concentration, his fiendish delight…

As many of you know, I loathe the term ‘progressive’ rock (surely all such musical genre terms are as infantile as doing a toddler’s jigsaw over and over again, each piece goes here, and here…), yet here is an outfit which fit that description without the slightest qualm from myself. The precise, invitingly friendly way in which the songs swarm around themselves is astounding. Whenever Ankin doesn’t need to sing, like the ladies, he either moves swiftly off stage, or to the side, leaving space for the band to lock, load and blaze. And - I can think of few higher compliments - Magma swing like no-one you’ve ever seen.

I repeat, Magma are magnificent; they are the one band I’ve seen which remind me of early-ish Can, that old intense, jamming, look-inside-but-push-it-outside kind of outfit. And I’m not sure they’re not better than Can, really. Certainly Magma’s songs are more natural, more … loosely tight. They pause at about the hour mark, and we roar ourselves stupid.

The band look pleased, really happy. I don’t think they were expecting such a forceful reaction. They are beloved. Their merch was all sold long before they got on stage, happy fans taking pictures of themselves wearing Magma shirts all over Thebby.

If you ever, ever get the chance to see Magma, do not pass it up under any circumstances.

As for Sunn0))). The band themselves, looking like scruffy roadies, set up their equipment and soundcheck unrecognised by the many-headed. No comments are made by the horde, as individual humans Sunn0))) may as well be invisible or, indeed, inhumans beneath the hood…

The sound, even at soundcheck, is quite loud. A young chap taps me on the shoulder and I turn, realising that everyone under 40 is wearing obvious earplugs. He has the kindness to enquire whether I shouldn’t be wearing earplugs too, and looks a bit concerned I might be one of these idiots who’d be annoyed at the question. Instead, I’m rather touched. My friend Nick leans over and explains that I’m an old-school punk rocker and I should be fine.

Anyway. The lights and smoke machines have also been checked, so now the smoke pots pour forth the biggest amount of stage smoke I have ever seen on a stage. The lighting is sparing; in fact, again I must congratulate Thebby for whoever is doing the lighting - both bands were represented superbly, sympathetically and in complete accord with their music and show. 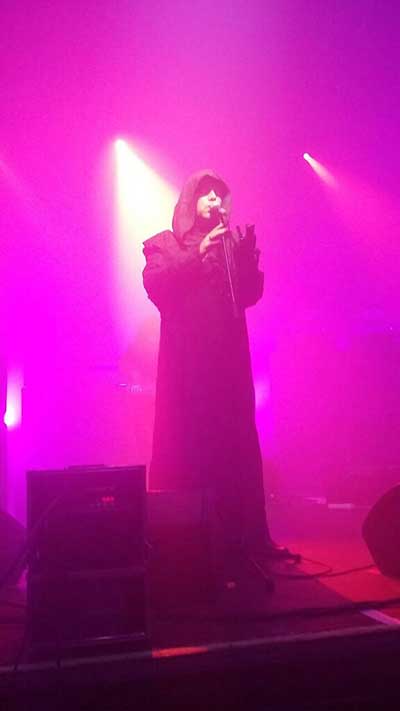 Four cowled figures slowly move on, three brandishing wine bottles, which they hold up in salute. Two guitarists, a synth player and a keyboard player. Wine bottles are again brandished and drunk from as if from some ancient ritual (which indeed it is). As the show goes on, there’s a lot of this hands-raised symbolism. The guitars are turned on, and one by one amp switches and boosters and corrupters are switched on. My ears do a sort of startled backflip, followed by what was possibly an indignant grunt, then settle down and get used to it.

For a while Sunn0))) are yes, quite bloody loud, I have actually heard much louder; critically, Sunn0))) have an astonishingly clean sound. It is, I think, important for me to mention that what Sunn0))) do with their sound is very carefully worked out, not at all random, and, given the pace and structure of the songs, a lot harder to do than it looks. At least one fuckwit band I can think of considers that to get an audience’s attention all you do is turn everything up and play like a hairy-handed teenager and everyone will worship you.

Actually, at this sound level, the slightest touch of the strings causes a corruptive sound the entire length of the Spiral Scratch EP (if not longer). It takes incredible discipline to choose when and where to strike the strings for maximum effect, and do this over and over in different ways for 90 minutes - and still maintain the audience’s aural attention - cannot be easy.

Finally the singer glides onstage, and it is here that I realise what this spectacle that I am seeing is. Certainly their cowls are monk-like, and the singer’s sun-symbol around his neck has a religious tone, and his physical gestures mimic aspects of the christian religious ritual … but what it all reminds me of with a bump is the Medmenham Hellfire Club, crossed wildly with Albert Speer’s superb architecture in the night sky, which Leni Reifenstahl captured so well in her film “Triumph of the Will”.

I have absolutely no idea what the singer is actually singing about, partly due to the corruptive aspect of his treated voice (though it sounds rather like Latin), and the tone of his voice is very reminiscent of the Gregorian Chant. If he weren’t doing this totally straight, completely lost in his personifying characterisation, this just wouldn’t work. Instead, even with (or perhaps because of) the cowls, the vast oceans of fog and the sometimes barely visible lights, the performance would not work.

The trappings, of course, do not make a show (and the volume level is a trapping), and having stood right in front of this extraordinary man for the majority of the show, I conclude that - musicians or no musicians - the singer carries the band into the stratosphere.

What Sunn0))) are putting on here is - bear with me here - a mass in a huge cathedral, with sonic holocaustic walls; hell, they even have the sacred smoke. It’s very, very clever, partly because it’s all done on such an enormous scale, with the implications of demonic, magickal ritual (rather than christianity - there’s nothing christian about this); in fact, toward the end, as the singer transforms into a raised-from-the-Pit Statue of Liberty covered in Mirrors,

I am struck with the thought that, in the USA, christian bigots and christian fanatics rage at all manner of rather innocent rock bands, Halloween and so on … I guess they haven’t encountered Sunn0))) yet. How this band have evaded the pitchforks of the true believers I cannot imagine. The only thing that’s missing is some huge bells. And possibly some hairy blokes being burned at the stake.

The band, lost in their hypnotic world, like medieval priests before a congregation of illiterate peasants, beguile us with lights like sunlight through stained glass windows, smoke from great swinging censers, and the aural towers of massed Gregorian Chants… You couldn’t make this up. Sunn0))) are frankly fucking amazing. How they got the idea for this I cannot imagine. They are clearly serious of their intent (I can see their faces beneath the cowls from where I am) and purpose.

I left after about an hour …

… to move from up the front to a seat at the back to see how the sound was up there. You needn’t have worried. Smoke had filled the entirety of Thebby now; the stage was visible only as a thick greenish blob. No figures were visible, no movement. It was a bit like a badly crowded summer’s night at the Tivoli in 1983, where punters vanished into the smoke, the ceiling and walls long-since vanished.

However brilliant Sunn0))) are, while I thoroughly enjoyed them, I’d rather see Boris every fortnight than Sunn0))) every nine months. Boris have a far greater range and diversity in their emotional repertoire, and they’re about seeing just what they can do and how far they can go in the chase for self-expression. Sunn0))) have a very limited range, and a dynamic which I feel is ultimately self-defeating … first, Boris are a rock’n’roll band, while Sunn0))) are a religious spectacle, and second … I could stand to see Magma every week. If I could afford it, I would.

Magma on the Web