Fresh Meat With No Strings Attached: Curt Kirkwood of the Meat Puppets

Written by Robert Brokenmouth on 28 March 2014.

First, these 20-minute interviews seem to 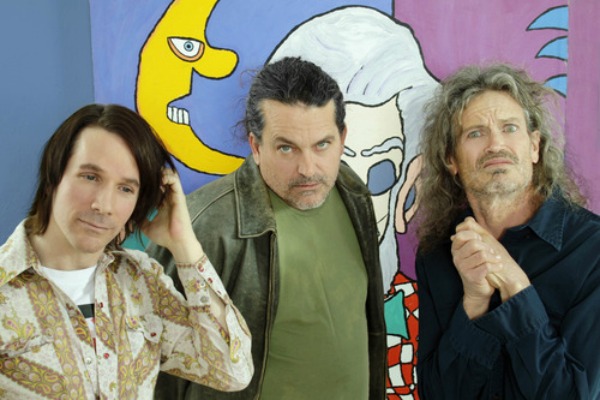 be the bane of journos everywhere. It seems the time-limit prevents the journos getting chummy with the artist. No wonder Prince doesn't give interviews anymore, who'd want a bunch of music journos crawling at ya, total strangers wanting to be your pal. Twenty minutes is fine. The artist is there to promote the album, use the journo as a conduit.

At the time I first heard the Meat Puppets' first LP (shortly after it managed to get to Australia) it seemed like the entirety of the USA were forming strange, fabulous punker-type bands. Some were hideous, some were 'you hadda be there' type affairs (The Dicks I never got, for example, or DOA) and some were astounding, like Really Red or the Big Boys, Husker Du or the Minutemen; I recall much whinging among the 'party faithful' about the Swans.

So, that first MP LP [chuckles at the irony] was s'posed to be played at 45rpm, but of course because it's 12" and an LP, I played it at 33rpm. It was remarkable, and I loved it. The chum who'd loaned it to me came in and said, 'Wow, what's that, it's incredible!'. I was puzzled, because he'd been playing it for the last three weeks and I had to beg to borrow it, so I figured he'd recognise it... I held up the sleeve... and we'll draw a veil over the next few moments...

Two years later the (now) more famous Meat Puppets II was released. An utter revelation. Such joy, such space, such an open, natural, country kind of sound. Curt's vocals were sweet, soaring and bitter. And whistling! Something I never got the hang of and always wanted to! By the time the third came along, Up on the Sun, I was overhearing conversations like, 'Have you heard the new Meat Puppets lp?' 'There's a third album? I'm still listening to the second!'. This was a band intent on doing what they wanted. They were out of step. They weren't noisy and aggressive. There was a better way.

It appears that the Meat Puppets wanted to get away from the dead end of punk. Every musician with any creativity is going to want to expand. In the USA there was apparently some punker squabble about the Meat Puppets 'not being punk', but quite frankly the majority of punk was and is the most boring, self-aggrandising sack of whinging shit you will ever endure. 001: Licence to Yell. Great if you're 14, not so interesting if you've heard a smidgeon of the possibilities of music. Punk stopped making a difference to anything except its small niche market of fellow-squabblers sometime in 1978 (maybe 1982 in the USA). As for 1991 being the year punk broke... no.

The best music in that film ain't punk, it's pop, or rock. Good stuff, but spare me the fucking niche-huggers: Kurt Cobain's inclusion of the Meat Puppets on MTV Unplugged, and on their In Utero tour emphasises that - and I might add that was a gutsy, FTW kinda thing to do. The Meat Puppets are a troubadour rock band with the sort of constant creative wheels in motion which does what any decent band should - take you away with a glorious flash of wings.

How can this be? I look down and realise they love Neil Young. 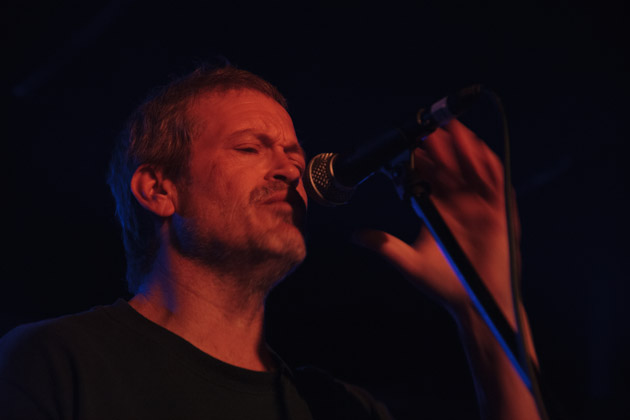 Curt: And old timey music, you know, like Marty Robbins and Burl Ives. They used to do some of that whistling. We weren't really trying to piss off the punks, although that happened to a certain extent, we were just being ourselves. We were just ... counter to what's going on. I mean... hmm. We did a tour with Primus in the '90s, and that was the last time we really pissed off an audience. I don't know what they expected. They were throwing coins at us, and the audience, you know, it's young men and they're aiming and throwing hard, so these coins were hitting us in the face.

The MP have had what might called a 'busy' time of things over the years; the inevitable temptations of r'n'r coupled with bass player and artist Cris being shot and jailed ten years ago was, one imagines, bloody horrible. You can read about it in Greg Prato's book, Too High To Die: Meet The Meat Puppets (Lulu.com) which 'Pups also sell on their website. It might not be the last word on the band, either.

Curt: Well, he [Prato] had an interesting angle, I think. I don't mind the book. He wasn't trying to tear me apart, there have been people ... you don't want things to be really Vietnam, but a little context... I mean, I've read articles where it's pretty dirty, and I look at it and think, 'oh, so that's what it's like to look at from the outside. Interesting.'

That's kind of because it's not necessarily about you, but about what other people think about you.

Curt: Yeah, maybe. I'm a pretty private person. It's not a facade, it's just how I am. I like my house. I like the quiet.

Which conjures up some sort of shack on the edge of nowhere, listening to the wind and the birds and the sands whishing by... According to the Intrepidwebs, Cris and Curt used to live in Tempe. Now Cris lives in Arizona, while Curt lives in Austin, Texas.

Curt: Well, Phoenix is a good place to have a sense of humour.

That kind of makes it seem like you hate the place but you're kinda embarrassed to say so.

Curt: Well, it's a big city in the middle of nowhere. There's not much culture. It's really beautiful. I mean, there are rough parts... there's not a lot of natives [he means people born and bred there, I think] and a lot of people move there to get away, and they bring their troubles with them. It's hot, there's sunshine 365 days a year... it can get very hot.

Manfully I refrain from digging out tomes such as A History of Criminal Drifters in Darwin (Volume CLXII, 1982-1983, 759 pages not including photographs, diagrams, index and appendices). I believe Alice Springs and Coober Pedy have similar journals. I advise that I'm very glad they're not touring Australia's equivalent of Phoenix and pretend I don't know they're playing Cronulla.

It must be difficult for someone who is basically ... a loner to some extent ... to get up onstage and blast it out, meet people afterwards, get on the bus and travel, do it all over again... It must feel weird. Is it difficult finding that part of you that's natural, that's not contrived, when you come to write a song?

Curt: If I try to be disciplined, and sit down to write, it ends up being pretty contrived. I have to wait for stuff to happen. Sometimes I edit a lot, I mean, that's kind of contrived. I mean, I can always tell when it's contrived. When it doesn't work.

The Meat Puppets have been recording and touring over the last few years, their current LP is Rat Farm, but if you have half a brain you'll grab all the others you missed. The thing to remember is, they haven't been here in Australia for nearly a quarter century and that in itself is reason enough to trundle along, unload the wallet ... if you haven't already done so here's the link.

Hang on, this is horseshit. Let me just make this completely clear: if you don't have any 'Pups LPs, get everything that's available on the site. Yes, every single LP.

Rat Farm is another slab of beauty, consideration, romance and joy you can't do without, and which you will find yourself singing along to after the first listen. As with every 'Pups lp, if you can whistle, you'll be whistling the occasional melody...there ain't a dud track on it, and as ever, you don't want the lp to end, but just take you on and on. Great driving music as well as great chill-out music. And damn fine lyrics. Everyone will make a fuss of Leave Your Head Alone, but that's like picking out one from 12 ...

Amusingly, photos on the web indicate they've outwardly not changed that much, still hairy and scruffy, they just put out stuff that makes you smile, whistle and sing and dance. Sod punk with its 'everyone must look alike and think alike' cul-de-sac attitude, it's gone on for far too long and it's far too dated. There's only a few bands out there now who can still feel that same emotive rage after all these years. Instead, try a band doing what punk should have done - gone out there.

Curt is the main lyric writer and vocalist. He's also the guitarist. He has a hell of a style, too.

Curt: People seem to like it. I never practise very much. I like to get a good tone... I like to think of myself as primarily a rhythm guitar player... part of the fun is the geometry of it... like I'm draughting something, like sculpture. I like to make something anomalous, that's fun to play as well...

Cris is the artist and the bassist, and the co-songwriter. He's bringing his artwork over. It's worth investigating. It's damn good.

Shandon Sahm is their drummer and, like all musicians, is in another band, what the intravenouswebs describe as a Texas roots glam band. Which probably makes more sense to hear than it does to type.

Elmo, Curt's son, is one striking character. Three weeks ago he posted this: "Your mouth is like sugar: I want to fill it with ants."

So how's Elmo fitting in with the band?

He's got a hell of a sense of humour - creative and a live-wire. He also has his own band, I think Flamingo is the third.

I'm beginning to think a more appropriate name for the band would be The Kirkwoods, or The Kirkwood Gang.

So, see Cris' artwork (he's bringing 30 pieces, a substantial exhibition), meet the artist, and see the gig ... limited tix at $70 each at, Adelaide (Friday 29th May), Brisbane (Saturday 30th), Sydney (31st) and Perth (Monday June 2nd). Astonishingly, it seems that tickets for the gig at the Cherry Bar in Melbourne - the 25th May - have not sold out. Melbourne should hang its head.

Go here to take a squint at Cris' art.

Lastly, Curt, what does mean rock'n'roll to you?

Curt: Music to drool into a bucket to. You know, we're hip, groovy, and we capture the spirit of youth.

By the time I finish pissing myself with laughter it's time to hang up.