Even saves the Queen (and her long weekend regime) 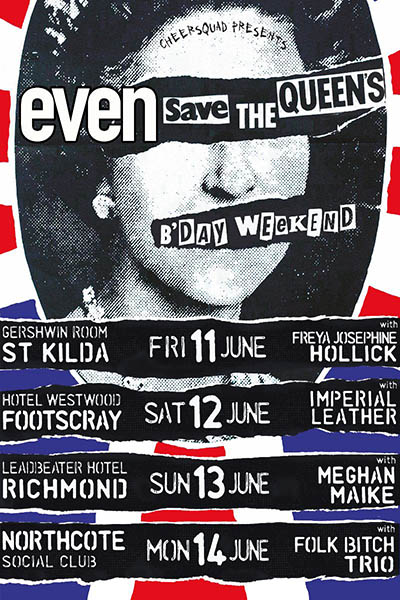 Melbourne’s royal rock’n’pop trio Even - who did include a stonking cover of the Sex Pistols’ "Pretty Vacant” on their recent “Down The Shops” covers collection - reckon that the Queen’s Birthday is worth celebrating. Indeed, they reckon it is their Antipodean duty to do so, especially given that Prince Philip is now no longer around to start the party.

But with four shows across the holiday weekend at great venues in the city’s inner north, south, east and west, "Even Saves The Queen’s Birthday Weekend” is not just a celebration of a fabulous public holiday, but of the great rock’n’roll city that is Melbourne.

New Cosmic Country queen Freya Josephine Hollick opens proceedings at the Gershwin Room on Friday, June 11. From then it's the tres glam Imperial Leather, featuring entities from both RRR and PBS-FM at the Westwood on Saturday the 12th; stranded Mississippi-based Canadian-Australian bluesy country singer-songwriter Meghan Maike on Sunday the 13th at the Leadbeater; and melancholy and melodious young trio of singer-songwriters the Folk Bitch Trio on Monday the 14th at the Northcote Social Club.

Monday's show is a matinee and under-18's are allowed in if accompanied by an adult.