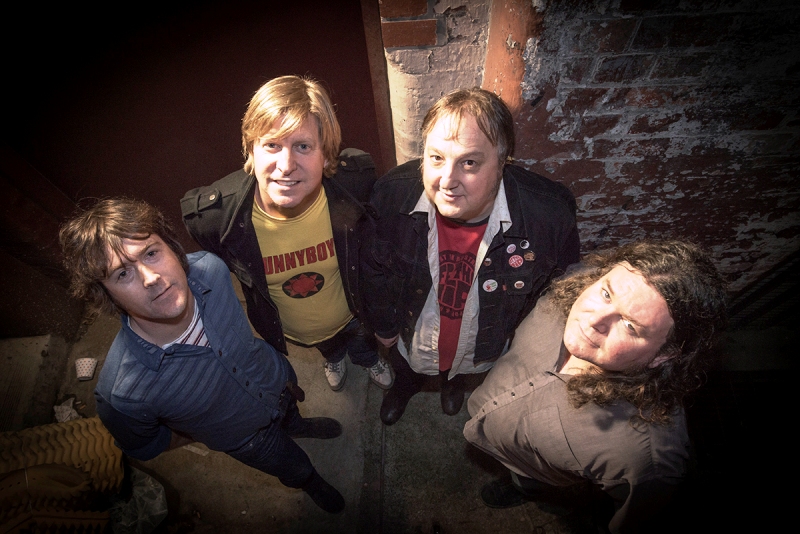 You may remember them from their 2002 debut album “Turn On With” fronted by Danny McDonald or “Guilty As Sin” (2004) with Perth legend Dom Mariani (Stems/Someloves) on guitar/vocals, but Melbourne’s Stoneage Hearts are back with a new line-up and record.

“Hung Up (On You)” is the newie on Off The Hip with the line-up of Tony Dyer (vocals/guitar), Simon Kay (lead guitar), Dave Hine (bass), plus mainstay skinsman Mick Baty.

What is the common denominator this time ‘round you as? Simple: Redd Kross.

Mick runs Melbourne’s iconic record store and label, Off The Hip, and in late 2012, ithree like-minded heads dropped in and bought the latest Redd Kross album “Researching The Blues” over the space of a week.

Striking up an immediate rapport, each time Mick asked: “Do you play?” Three affirmatives were a sign to Mick that it was indeed time to get his beloved Stoneage Hearts happening again.

“Hung Up (On You)” contains elements of The Las, Smithereens and Plimsouls played in classic Australian guitar pop style. From the chime and jangle of “Train at 8”, the Attractions beat of “First Kiss” and good time riffage’ of “Is She”, the album’s 11 tracks take up the torch right where “Guilty As Sin” left off.

The album release is scheduled for April 16 and launch shows are lined up: