In Every Dream Home - Atom (It Records) 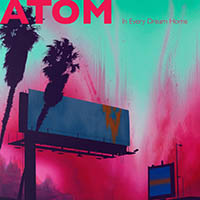 Atom have been playing around Melbourne for several years, and this is partly the result. I say 'partly' because I know they have other songs up their sleeves (and a few deft covers), and also because they're most engaging live, drawing you in like a nurse soothes a muscle-man pretending he doesn't have a fear of needles.

Those of you alert to the ways of the musical underground will recognise at once that this is another brainchild of Harry Howard and Edwina Preston. With the first track, 'Run Out', we're right there in that cut-up era Harry and Ed have created for themselves (somewhere between 1958 and 1989, it seems). In a different place and time, they'd have John Peel thrashing Atom's every B-side while turfing The Cure and The Mission sessions into the archives.

One of the several things which makes me excited about what Harry'n' Ed do is that it's all really, really simple. And I love it. I doubt that it's as easy to make as it is to create, but there's an elegance of expression, of repetition, in both the lyrics and the musical codas.

A number of things mark "In Every Dream Home": the introduction of Ben Hepworth's drum machine and synthesisers, which complement Ed's keyboards, and Harry's expert guitar. Ben creates a consciously old school vibe, providing a vivid platform for Ed and Harry's alternating vocals.

Oh, dear. Harry has just poked his head over the backyard wall with a couple of corrections; "Reading now I should have told you to streass Harry'n' Ed' 'n' BEN because he is REALLY important and he wrote the basis of "Runout" and "Russian" (and "Follow Me" with Ed), and his style influenced the way we did everything. I should have said so before." So, back to listening to "In Every Dream Home"...

When the second song ('Russian') comes on, you might be forgiven for thinking Cindy Wilson or Kate Pierson from the B52s has joined the team. Thing is, a lot of women think they shouldn't sing that way - in fact, I'd say the Tina Arena or Aretha Franklin way is the exception rather than the rule. Ed's voice has absolutely developed from that first NDE LP and we're now listening to greater depth, and a greater range of emotions.

And dank lyrics, too;

Such potent jealousy, such rage at the interloper - and such humour that she can see it so clearly. Intelligent, scything contempt.

So Ed Preston won't be on "The Voice" anytime soon. Too idiosyncratic, too full of intelligence and actual emotion. Also, she's an author, and a good one, and has proper academic qualifications. More soma, Mr George?

So by the second song we know there's a pulsing, icepick humour rubbing shoulders with a dark heart. Rather than Atom belabouring a bucket o'woe, you're invited to notice it yourself. When you do (as you will), the effect is a bit like going out of a dark, damp room at the fag end of winter into a rather glorious spring day, with everything clear and bright and full of pink blossoms ... erm. Right, that's enough of that. As you know, I ain't Wordsworth (just wordy).

By the third, "I Used to Win", after being drenched by a sonicsynth holocaust we know we're in an alternative universe where Harry and Ed singlehandedly record LPs which are the equivalent of an entire Pebbles or Nuggets compilation - but with no duff or 'joke' tracks.

I might add that Atom's lyrics are extremely short and simple, conveying just what is needed in a couple of verses. For example, from the 4th track, "Parasite": "600 days and nights/ I've been asleep/ 'Cause no-one sees me..."

I won't talk about the other songs, except to say - "Every Dream Home" is an excellent LP, a step forward and up from the NDE - though I suspect Harry and Ed think of it more of a sidestep - and it needs your love and sticky fingers. Recorded by Simon Grounds in Melbourne, mastered by Mikey Young, I can only urge you to forget the grandkid's education fund, sod the kid's inheritance, and hasten to both It Records and stock up on greatness.