Written by Robert Brokenmouth, Steve Lorkin & The Barman on 23 April 2022. 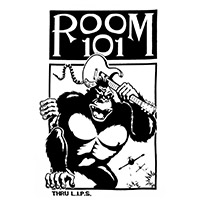 This particular Room 101 were the first band to use the name that I'm aware of; there is now a chat show (dear God), a band from Lansing (Michigan) and a post-hip-hop outfit from Nuh Zuhlund, which explains why this band's bandcamp addy is https://room1011.bandcamp.com/

"Concrete Box" is a slice of simple, socially-observant venom articulately snapped out, with zipping twin guitars in sharp sync with bass and drums, with a lyrical trajectory perfect for the physically active lead singer. Granted the pop world had moved on somewhat from guitars (so the industry thought at the time)  but the crowds in Sydney thronged to hammering bands like Room 101. Given some of the rather woeful "punker" type bands which appeared each Sunday night on 'Countdown', Room 101 would've cheered you up no end.

"Crazy For You" is well and truly Birdman territory, that floating sensation on top of a ferocious onslaught, a riff that allows the song to steamroller forward relentlessly. It's great fun. Spirited backing vocals hint at what might have been... as I'm sure you all know, the late 1970s and 1980s were awash with Birdman-inspired outfits. Some were even fairly good (so I'm told). Damn, but Room 101 would've been a fine sight to see.

Back in 1980, a single from Room 101 would have got your attention for sure. If you hadn't already seen them, you'd make the effort. If the band coulda stayed afloat long enough, you'd have got the LP too. I have no idea why they called it a day, nor why they never got more recorded, but we're the poorer for it. - Robert Brokenmouth

Formed from the wreckage of The Professors, Miss B Haven (with Phil Sommerville who went onto The Hitmen and Brett Eldorado who went onto Coup De Ville), Subversion and The Assassins, Room 101 blended a sound that to my ears echoes Radio Birdman and the early Hitmen with a splash of ‘60s garage punk.

The B-side “Crazy For You” has a nice, early Masters Apprentices-style intro before lead-footing it into a Darlinghurst back alley. A sound not a million miles away from what The Exploding White Mice excelled at in their early days

The A side “Concrete Box” is more of the same. It reminds me of Radio Birdman’s live version of “Kick Out The Jams”. The singer, Tom Price, has a cool vibe with plenty of desperate attitude in his vocals.

Through the wonders of modern sound technology these two songs were mastered from a cassette of the only remaining dub as the original tapes were lost when a band member took them to the USA and misplaced them (that band member did manage to meet Roky Erickson so the journey wasn’t all band). The tracks could have easily slotted onto the “Do The Pop” compilations...and that, my friends, is a recommendation. – Steve Lorkin

Room 101 was a torture chamber in George Orwell’s “1984” where prisoners were subjected to their own worst fear to make them bend to the will of the State. That sounds like being forced to listen to commercial radio for a day – which is one thing I’m guessing the members of late ‘70s Sydney band Room 101 would never have inflicted on themselves.

Steeped in the sturm und drang of the exploding inner-Sydney music scene kicked off by Radio Birdman, they existed on its fringes long enough to merit a live review in the pages of the esteemed RAM magazine and record this at suburban Accent Studios.

Bruce Tindale, one of the band’s two guitarists who was also a devout Birdman follower and chronicler of the scene via camera, exhumed the tapes of a 1980 recording session.  Accent’s resident engineer Ross McGregor was blind but had a great ear and he captured their nascent sound

“Concrete Box” is as tough as old leather, a doom-tinged pean to urban alienation that bristles thanks to Tom Price’s imperious vocal and a single-minded engine room. Tindale and Tom Easton’s guitar solos punch through the mix as discrete upper cuts rather than measured punctuation.

“Crazy For You” opens with a Tek-esque introductory chord and some ragged Visitors backing vocals on the back of a loping Arthur Easton bassline. Derivative but thoroughly enjoyable. Room 101 would have easily gone the distance on a bill with any of their influences. – The Barman