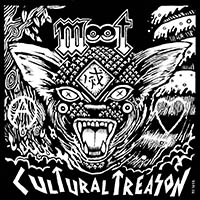 "I Want To Be Like Clint Eastwood" does a nice line in cultural appropriation (a la the Celibate Rifles' adoption of the Marlboro refrain in "Kent's Theme") that ends up as a plea from the downtrodden. "1000 Words" rips into Zuckerbook like there's no tomorrow with a detour into an economical John Walker solo. "Yummy Mummy" should go down well in Bondi or Mosman.

The vocals of Ross Dreise occupy the higher end of the register so there's no ignoring his Biafra-like bark. Moot is tighter than a fish's and there’s a streak of “fuck you” running through “Cultural Treason” that you’d be stone deaf to miss. You can download "Cultural Treason" here or hit up the band for a physical copy of the seven-inch vinyl thing on Facebook. Hippies need not apply.