Ex-Harem Scarem bluesman gets under the skin

Written by Robert Brokenbmouth on 04 December 2019. 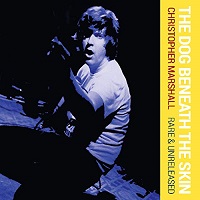 The Dog Beneath the Skin. Rare and Unreleased - Christopher Marshall (digital release)

Chris Marshall's “The Dog Beneath the Skin” collection serves as a welcome reminder that the blues is a broad tapestry indeed. I repeat what I said above, my record collection does not have much modern blues. I do have some Harem Scarem, however, because they crash along a rough road twining hellish skronk and sweet blues.

There's a killer version of “Figurehead” here, and a fine version of “Dogman” (featuring the late Chris Wilson on harmonica); there's also unreleased performances of “Hard Rain” and “My Town” - the latter a band staple that was co-written with brother Charlie, but never otherwise recorded, with Christopher on lead vocals.

Like his fellow bandmate, the late Chris Wilson, Marshall's voice is quite extraordinary, and you can pretty much pick your own favourite blues-esque vocalist to compare him to.

I played “The Dog Beneath the Skin” to a couple of friends and one instant comment 'ooh, Lyrnd Skynrd!' had me reaching for the revolver. Can't they hear the vast differences? On calming down, I realised, well... a few similar influences, possibly. Less the feedback and gut-wrenching. The liner notes suggest Jeffrey Lee Pierce and Tim Buckley, while Cocker and Ray Charles come to mind for me ... but really you gotta make your own mind up.

Now look. I can't realistically compare Chris Marshall with modern blues artists, because my idea of modern blues is Hugo Race's take on John Lee Hooker, not (say) Robert Cray. As I said, for me the modern sweet blues doesn't usually attract. So ... bugger it, I'll have to make an exception here, because this is one damned enjoyable collection, and at 70 minutes it's the size of either three 12" sides, or four if you cut the grooves wide. I've played it four times in the car CD player so far and ... oh, bugger. Can't find it. End of review? I'll go look for it.

[some time and heated conversation later]

Ah, right, well. My offsider's nicked it, saying she deserves it more than I do.

That should tell you something.

The Christopher Marshall Predestination plays live - get out there and catch them. Google to find a download of the album online.

Tags: chris, harem scarem, marshall, The Dog Beneath the Skin. Rare and Unreleased