Written by Robert Brokenmouth on 16 February 2018. 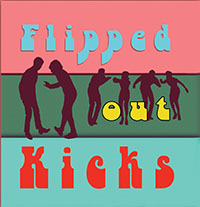 Why? Well, apart from the fun of watching your girlfriend immediately leap to her feet or drop what she's holding and begin to gyrate wildly (the Frug, possibly), this is more-or-less genuine '60s guitar-based garage punk.

Well, it's noisy r'n'b actually, but who's taking notes? You're too busy bopping. There's bags of talent and energy here. Up front we have Tim Knuckey (who wrote two originals) on vocals, guitar and harp, and Jonathan "Gretsch" Adams on guitar and vocals, who wrote two more.

Knuckey you may recall from the Wet Taxis and rockabilly outfit Satellite 5; Adams (or Gretsch) from his rockabilly outfit The Wasted Ones. Looks like they planned this breakout from Quiffville for a long time.

Simon Wales, the drummer, is also an escapee from a jailhouse rockabilly (The Casino Rumblers), and Lachlan Colquhoun should need no introduction, being a swell, a bon vivant, writer and so forth: here he plays bass.

It all sounds bright, tuff, attention-getting and gritty as all get-out; ex-X-Ray-Spexer Rudi Thompson's sax fits right into Martin White's recording. White? Used to work with Virgin, recording everyone from the Mentals to Ravi Shankar to (gulp) Ozzie Osbourne.

The two covers are by Rhode Island's The Others - their 1965  minor hit "I Can't Stand Your Love, Goodbye" (not everyone wanted to hold your hand - even if by the time this song came out John Lennon was crying for help) which you can find on "Pebbles" 8, and "Lie, Beg, Borrow and Steal" by the appallingly-named Mouse and the Traps (you'd think that by 1967 they could've come up with something better). Both covers are crackers - but the real deal is that the Flipped Out Kicks' originals are just as good as the gems they dug outta the remainder bins in the '70s.

(Try putting it on when she's in her underwear)