Hard to pass up 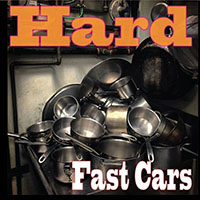 In a digital world where old rules are made to be re-written or not read, Fast Cars have resolutely done things their own way.

The one-time Sydney mod band reformed virtually in 2015, assembling music from composite parts written and recorded by principal members, vocalist-guitarist Di Levi and guitarist Fabian Byrne, on opposite sides of the world. It was polished pop with hints of its Sussex Hotel beginnings, lush in lots of places and moiving into the realm of dream pop.

Virtual band, huh? Live shows were where Australian bands traditionally honed their act and of course people interacting in a studio adds an energy that can’t easily be replicated. With Levy visiting Australia from the UK, Fast Cars did a handful of pre-pandemic shows, and part recorded “Hard” with Peter Bennett (The Welcome Mat, Fiction Romance) on drums and David Pye on bass.

“Hard” follows 2019’s “Soft” and replaces dream pop with edgier power pop. “Soft” leant on programmed rhythms and  “Hard” has a live-r feel. Di Levy’s formidable vocal is still centre-stage and the songs (all Levi-Byrne co-writes) rate with the band’s best. There’s an ‘80s touch to the production (and not in a bad way) but it’s a record with some contemporary messages: “Trouble” and “The World Is Not An Ashtray” tackle environmentalism, and are stand-outs.

Chiming opener “Why Don’t You Just Say?” sets the mood from the get-go: a fine piece of emotional pop. “Everything About You” flips the switch from kiss-off to embrace. ”One By One” is classic poised power-pop in its build to a layered, multi-tracked chorus.

The gated vocal on “No Compromise” really does wind the clock back - and that won’t be a bad thing for most of the Fast Cars audience. It was an ear-catching digital single but i can't help thjinking that some of Byrne’s sharp playing is buried in an overly busy mix on this one.

The rumble and flourishes of “Life Is Hard” (a story of workplace tedium that may be ironic) and the business-like throb of “Not Sorry” contrast with “Believe in You”, a song that soars into a pop hook from understated beginnings.

If you’re a fan of intelligent pop that’s well-rendered, of course you’ll want it.