Pimped By The Gods - Billy Tsounis & The Amazing Androids (self released) 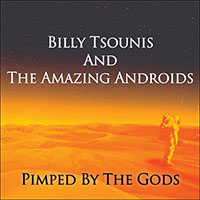 If you are just surfin' around the net on the lookout for this week's dime-a-dozen Richie Rich, aggression free, smiley-faced, redundant, Ramones tribute band with the obligatory Lewis leather apparel and Betty Page hair-do's, this might not really be your thing. But if your chakras are open to some really far-out psychedelic, cosmic consciousness, vibrating at a higher frequency, maan, this might be your new trip-room soundtrack.

Unless you are an esoteric cultist from Cali's stoner underground, who is familiar with Vaseline Tuner, you probably best know Billy Tsounis from his chrome and thunder oriented Black Betty ramalam collaborations with stalwart swamp-boogie supergroups, like Circus Of Power, Captain Zapped, and Fat Nancy, and while his flame fingered fancy fret-work is always recognizable, his Android's stuff is more surreal, subtle, delicate, and Dali-esque than his motor-rawk riffage with his heavy metal gangs. Different elements are at play here, less dirt and sand and wind whipping your face, more fireballs and lightning storms, and sunbursts and crashing asteroids and vividly bright colors lighting up the sky.

Whenever you think of Captain Zapped or Circus Of Power, it's all sunburnt, road-worn, seventies skull-ringed, classic rock debauchery and sweaty, hard workin', heavy drinkin', blue collar, Freedom Rock kicks, am I right? The Amazing Androids are more like Fripp and Eno produced the early Flaming Lips.

It's glistening acid punk and comic book sirens and dapples of moonlight flickering on sea foam and old Van Halen songs about mermaids, airbrushed by longhaired beach-bums on the side of your stinky old makeout van. Billy Tsounis is a virtuoso guitar god for the practicing musician, he plays circles around almost all of his contemporaries, painting Godzilla sized sky sculptures  with orange smoke and Neptune's trident.

He is a sonic graffiti artist, what Basquiat was to tenement walls in the Lower East Side, Billy does that to your brain, he leaves his stencil inside your skull. He paints with neon tones like Hendrix, effortlessly embroidering these intricate little symphonies to God that make you long to dropout of the capitalist rat-race gentrification fashion show karaoke popularity contest and lightout for the panoramic horizon.

If you're expecting black leather chapped, unshaven desert-metal reminiscent of Blackfoot and Golden Earring and Black Oak Arkansas, like with his thunderking collaborations with Circus Of Power's mighty metal-mystic, Alex Mitchell, they are about to release their fourth album, any day now, but this Aliens project ain't really about roadhouses and raunchy riffage, it's about space, the final frontier. The Androids sound is extremely colorful and adventurous and as a lyric writin' man, I ain't usually all that keen on instrumentals, but Billy Tsounis eloquently tells stories with sounds.

Gloriously golden hued, blinding visions of angels and harpies, scantily clad Valkyries, witches dancing in the woods, galactic voyages and crashlanding rockets and shit. If some booj college grad would teach me video editing, I'd be making documentaries about, you know-what's really HAPPENING, and all this music would be a profoundly poignant and daring accompaniment, it's all about travelling, it's got great movement.

The Androids tunes are all about cactuses and constellations, seaweed and stars, messages from the Milky Way being transmitted to hilltop hermits barking at the moon. Billy's song titles and lyrics are always a bit strange, like Frank Zappa, but his surprisingly explosive and illuminating audio explorations take you on a sight seeing journey aboard his own shiny spacecraft.

Be sure to look him up online and give him a real listen-especially if you still have access to high quality recreational pharmaceuticals, or appreciate the more melancholy, heartfelt yearning side of Jimi Hendrix. Hot pink and day glo green hallucinations for UFO hitch-hikers of all ages.