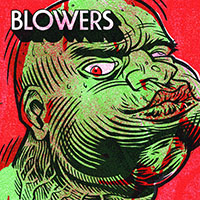 There was a moment during last year’s Victorian lockdown, probably early September when shit was at its worst. The bleakness of the climate - cold, grey and crappy, in the way that Melbourne does it - matched the desolation of public spirit, provoking in me a desire for old school punk rock attitude and resistance.

Not resistance in the form of conspiratorial wingnuttery nor the specious proclamations of human rights and freedom imported from a dying empire, but just anything resembling a deviation from the obsequious adherence, self-adorned piety and moronic retributive attitude which seemed to have descended upon the state.

Sitting out in my shed one Saturday night I decided to play the angriest records I could find in my collection – Bikini Kill, Dead Kennedys, Bits of Shit, DOA, Kill Rock Stars compilations, Crush, X. It didn’t make any difference, really, but it was cathartic and energising.

I could have done with “Blowers” right about then. There’s nothing nice and comforting about the cut, thrust and gut-stabbing fuck you of Blowers. And that’s just why it’s so vital. Fourteen songs, barely anything above two minutes, no fat, no pretension, no rest for the boring old fart brigade who reckon it’s all been done before.

It’s there from the first brutal chords of “Ripped”, wrestling you violently from your pathetic slumber, shoving your face in the myopic idiocy of so-called civilised society. Jump to “Cut Throat”, a pop song lined with barbed wire and broken bottles and you remember just what it’s like to live.

“Too Old For This Shit” has to be ironic – if you reckon you’re too old for this, then fuck off and get yourself a Doobie Brothers compilation and be done with it. “Eat It Up” trades pace for thumping rhythm and a snarling rebuke to the whinging and complaining – you make me sick, you really fucking do.

“Waste of a Man” is punk machismo bent through a post-modernist lens, “Hitman” is so brutal it’s on an FBI Most Wanted list and “Excerpt” is, well, just that, five seconds before “Chainsaw” arrives like the deranged protagonist in a Troma film and proceeds to lay waste to what’s left of your trembling psyche.

“No One Cares” is nihilism with a Wipers inflection, “Time to Leave Her” the amphetamine-spiked soundtrack to a doomed relationship, “Exterminate” is what happens when you leave a cohort of Daleks with some Digger & the Pussycats records, and “Hate that Shit” not only has the best opening spark ever (“fuck that”), but a Nuggets-meets-Cosmic Psychos edge that takes you to a killer place.

“Can’t Get Started” is either a lesson for life or a challenge – if you haven’t started yet, you’ll never get started now – and “Blow” rounds out the album with frontal lobe crushing intensity (“I don’t wanna fuck around, I wanna blow”).

A world without punk rock is a world that has no hope. Next time lockdown comes around, Blowers is my happy place.