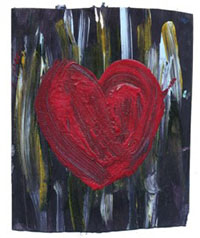 “Venus de Milo” is a longer piece, a well-constructed earth-mover of a song, smart lyrics - they're clear, moving and sword-like. What makes the songs interesting is that she's singing about women - but not the “stand by your man” or “but I love eeeemmm” type.

“Maritime Pome” (that may be a typo, but it shouldn't be) is a slow slammer straight out of the underground, circa 1986, with McIver sounding a tad Lunch-ish over the top - at this point we pause to take in the (superior to Lunch's) lyrics.

the kelson, the keel
how it builds
how I feel
jib-boom, gunwale
the story, the tale
the head, the bow
the way of knowing
the way I know
forecastle, foremast

NQR are developing, clearly, and I'll say right now that I'd love to see this outfit live. Mostly 'cause the songs are so very different; you can't predict where they'll head next.

“Veronica Lake” takes us in a different direction again... and 'Titanic” slows down the structure of “Raw Power” and takes us ... you've got the idea. Big, tuff, scary gorilla music with more than a bit of thought.

It's on repeat at my place, as it should be at yours.

Oh, just noticed Loki Lockwood of Melbourne’s Spooky Records did the mastering (and if you don't think that's significant, it's not my fault you're deaf).

Also, NQR play for free every Thursday in July at The Tote Front Bar in Melbourne.  Come to Adelaide you bastards.