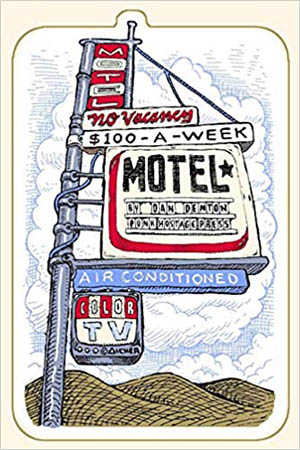 Holy Toledo! I read this book in just two sittings, even though I have awful eyesight and live in a dark trailer with crazy loud kid media blasting at me around the clock. It's that good, you won't want to put it down.

It's one of those rare books for people like me with short attention spans, it feels more like a movie or record, because his masterful and observant descriptions of everyday people struggling to survive under the boot of oligarchs and jackbooted Gestapo in the shadows of the dying empire's corporatized police state, where most wounded, helpless people are born into extreme poverty, abused, neglected, abandoned, and instructed to piss-test and compete for bottom-feeder, no future jobs that never pay a living wage.

Most of us never really stand a chance. It's refreshingly blunt and real, and does not suck-up to booj college standards of asskiss phoniness. It's the real story of plain-spoken, midwestern, working class heroes and heroines struggling to medicate their pain and find some sort of redeeming intimacies, grace and dignity, any consolation or impression of consolation, before passing out and waking up to a shrill clock radio.

People cannot stop themselves from dreaming, from seeking redemption in the arms of a gypsy-queen of the highway, and from sometimes, losing their cool and freaking the fuck out. All these characters are searching for some kind of higher power, divine intervention, warmth of home, even though they are mostly helpless, cursed, traumatized and all tragically ill prepared to meet the demands of rent and still have coins left over for some malt liquor and gas station food.

You will feel like Dan Denton is writing about the people you know, the sad souls most of us grew up with-particularly, if you've ever been stuck in the loveless hellhole of Ohio where they manufacture the corrections-guards and buckeyed sports fans for cannon fodder and fast food management, and one's only hope of escape is the factory where they tell you that work will set you free.

Denton is such a vivid illustrator with a real gift for word slinging, you'll swear these are surely some of the people from your own shitty bar on the corner. He is probably the best novelist of our generation. If you love Charles Bukowski, and let's face it, if you are reading my words here at this particular platform, chances are pretty high you do, or Hunter S. Thompson, or even James Baldwin, you're gonna love Dan Denton, too. His writing is totally fucking rock 'n' roll, pained and tortured, but also humane and courageous. He makes me laugh three or four times in the course of this book, and I'm a pretty depressed and sullen person. This book is full of heart and I think you should probably order a copy as soon as you possibly can.