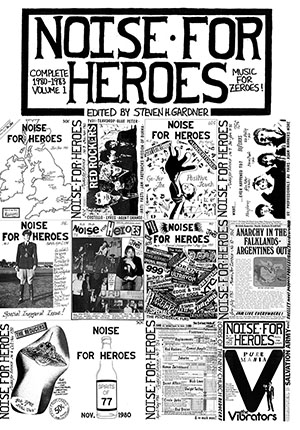 It’s hard to overstate the importance of zines in a pre-Internet world. Along with college radio, they  powered the American underground music circuit. In Australia, they connected underground bands, and fans across a country of disparate cities and gave insights into scenes overseas in a way mainstream music papers could never reflect. In Europe, they were oxygen for a culture considered low brow that fought to find an audience. 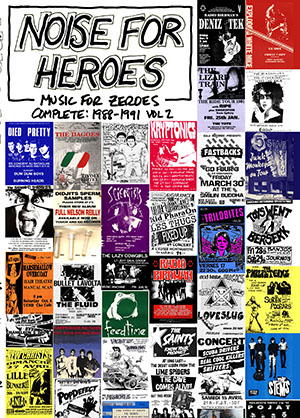 Named for a lyric in a Damned song, NFH had its heyday in the ‘80s and kept going until grunge’s major label push splintered a healthy underground scene in the ‘90s. There was a hiatus and the magazine was revived online for a time. Gardner also wrote for New York-based underground music bible, The Big Takeover.

There are plusses to  living in a digital world and one is the ready availability of lost artefacts like NFH. It’s in hard-copy books on the US Amazon site (it wil ship to some countries but it's not available for Australia), or you can download a digital copy via Bandcamp.

These are the complete and unabridged versions, collated in three volumes. If you go for the Bandcamp option, they’re hefty downloads - 400 pages each - in PDF format that will be sent via a file download service after you order. They’re best consumed on a tablet or PDF-capable reader, but a desktop or laptop will do.

(There's also a multi-volume Gardner history of punk rock, "Another Tunless Racket", which wil be reviewed here in the near future.)

Where to begin? Like the recently published Australian retrospective “The Big Beat: rock music in Australia 1978-1983” documenting Roadrunner magazine, there is a mass of content to get your head around. You can read it page by page or skim its contents, dipping in and out. Either way, you’ll be down a rabbit hole for hours.

NFH started with a dozen issues over three years and with what would be a familiar pattern. First, came the reviews - usually pithy but always opinionated. There’s a healthy mistrust of “metal” in spite of the editor, at least, coming from a classic rock upbringing. Then some opinion pieces or interviews.

A feature on The Boys (not the Perth band) and predecessors Hollywood Brats in the first issue set things up. There’s not much focus on “local” (San Diego) bands but plenty on unsung American acts. Brits like Buzzcocks, Wire, the Pistols, The Jam, Elvis Costello and some dodgy outfit called U2 all figured prominently in NFH’s early life.

From a biased perspective, it’s Volume 2 where the rubber hits the road. Issue 13 (US Spring 1988) was an all-Australian edition. Gardner wrote his middle and late period articles with the benefit of a couple of trips Down Under where he saw, and met, many of the bands he was listening to. Steve was deeply immersed in the catalogues of Phantom, Citadel and Waterfront but was curious enough to explore other labels like Greasy Pop, Aberrant, Hot, Redeye, Dog Meat and Flying Nun as well.

You can take issue with some of the reviews (I do!) but they’re based on a consistent requirement for high energy and powerful music matched by melody. The Hard-Ons get a hard time when they stray into metal.Th sadly missed Happy Hate Me Nots, on the other hand, can do no wrong. Nick Cave doesn’t get a look in. The Naked Lunch get a baking. They're not alone. The Screaming Tribesmen cop some lukewarm treatment. The Johnnys get a dissing. The early Lime Spiders and Trllobites both get kudos. Steve was such a fan of the Exploding White Mice that he put his money where his moth was and put out their last album.

The interviews were mostly conducted by mailed cassette tape or occasionally by phone, and are some of the most definitive of their time. You’ll find feedtime, Hard-Ons, Kryptonics, Bored!, Died Pretty, The Lizard Train, Rob Younger, Dom Mariani and Kent Steedman among the Australian inclusions, while the Rezillos, Pat Todd (Lazy Cowgirls), Jeremy Gluck (Barracudas), Nick and Hans (The Nomads), Jeff Dahl and Dominique Laboubee (of France’s The Dogs) are among the international subjects. 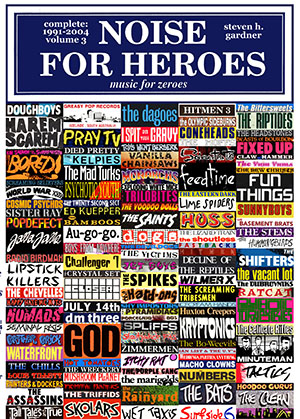 By the time NFH’s third life began, Steve was a leading light of the Divine Rites mailing list, which was a Yahoo group set up by Frenchman Didier Georgieff where global obsessions with Australian underground music were played out via email. This volume includes the last two physical issues of NFH and appends stuff penned for The Big Takeover. Much of it found its way online to complement the NFH mail order shop.

NFH’s online re-birth was partly fuelled by Gardner visiting Australia for the 2002 Radio Birdman tour, which gave him opportunities to (again) eyeball many of his subjects.  I was lucky enough to sit in on one such interview, with Citadel’s John Needham. An insightful grilling of Deniz Tek and Rob Younger is here, too, and manages to go over relatively fresh ground.

A lengthy phoner with Chris Bailey yielded NFH one of the best Saints pieces you’ll read. Jules Normington (Phantom) gets all reflective, and his interview stands up an an important documentation of one of Sydney underground music’s most important labels.,

There’s a chat with Brad Shepherd, who was then riding a wave of critical appreciation for his own band, The Monarchs, after the Hoodoo Gurus had broken up. Interviews with Kim Salmon, Penny Ikinger, Brett Myers, Rob Griffiths, Asteroid B612’s John Spittles (aka Johnny Casino), Stewart Cunningham (Brother Brick) and Ashley Thomson (The Kelpies) are among the best things here.

Perhaps Steve says it best: “There were better fanzines, and there were more informed writers, but NFH was typical of the period, and it has the advantage that the editor still has the interest, the original paste ups, and the time needed to assemble to create a unique time capsule documenting a fan’s perspective on new wave and indie rock in the first few years of the ‘80s.”.

This is one of the most essential purchases you'll make this year.