Written by Robert Brokenmouth on 27 September 2016. 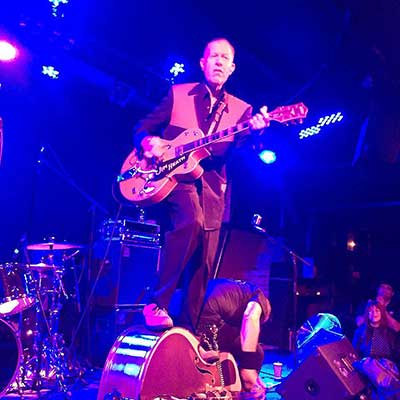 So, tonight looks like a cracker of an evening, and I don’t want to miss it. Neither do the crowd, who tonight range from 70+ downwards to about 18 and, while you might see these ages at the Rolling Stones, what you don’t see are the entire age-group bopping. Nor do you usually see 70-somethings in the pit. No-one here tonight is cynical, everyone here loves the show, the music, and the vibe, folks, is friendly, open and … that rare beast, fun. There are a lot of big smiles, most people get here early.

Every band had a double-bass. Each band had songs which did not sound the same (a complaint occasionally aimed at rockabilly bands, but which should more properly be aimed at punk bands, hardcore and so on). Every band tonight delivered a cracking show, made wonderful, moving, intimate music which had rather a lot of us dancing and grinning so hard it hurt our faces.

First up are The Saucermen, an Adelaide outfit who I keep trying to get to see but despite wide acclaim I’ve not managed it. Your reporter has been an idiot. 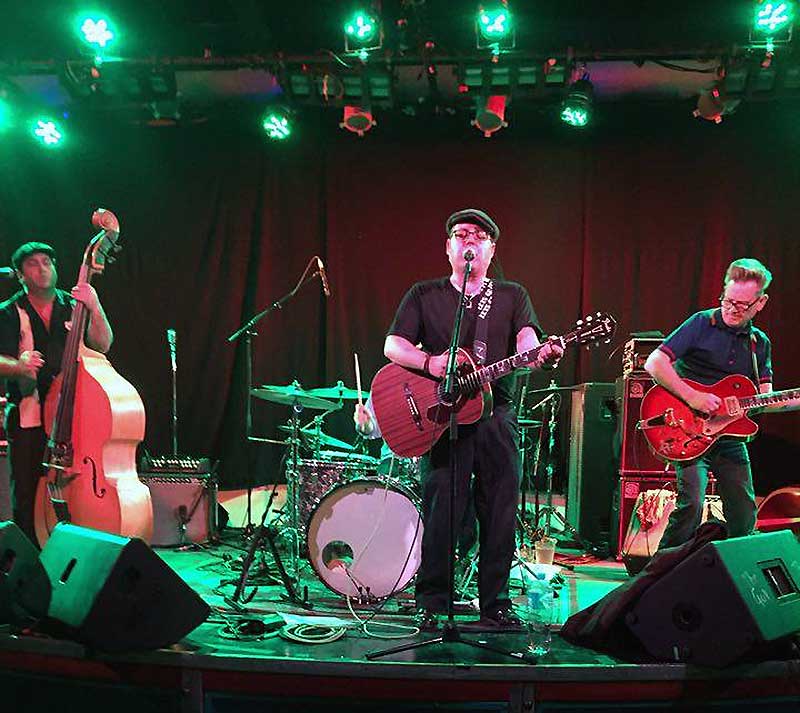 The Saucermen are a four-piece rockabilly band who are damn fine. Adelaide-based, they deserve fame and fortune, and their approach to rockabilly takes in contemporary psychobilly (but also ska - they covered Gangsters tonight, for example). With that sort of attitude, they’re not your ‘normal’ rockabilly outfit, and I’ll make a point of seeing them again. The Saucermen have cds out. Get cracking.

Next up is Pat Capocci, who has also been to Adelaide many times, and I really am an idiot. Sydneysider Pat caught the eye of the Reverend (surfing on YouTube, apparently) and got dragged to the USA. He’s got records in the pipeline on Ruby Records. 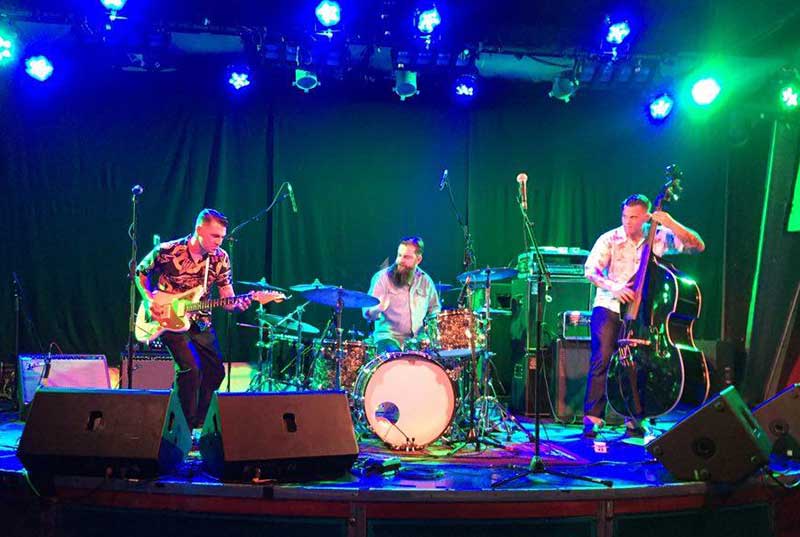 Pat Capocci is using a two-piece pick-up outfit tonight (the drummer from the Saucermen did double duty). Now, let me say this man is a stunning guitarist. Unlike most stunning guitarists, he’s not desperately trying to get your attention. He just does it, and he’s a natural.

Every song is different, every song has aspects where you’re wondering just what he promised the devil at the crossroads, he can sing and he makes things that look horribly complex on the fretboard look like he’s brushing his teeth. It’s a privilege to witness talent like this, the man’s a star waiting to happen.

More blues-based perhaps than most rockabilly, we don’t hear too many aspects of country … but the twang and the tone and the sheer naturalness of the man’s skill is just wonderful. That said, you’ll be dancing most of the time. If you see no other band or outfit between now and January 2018, see Pat Capocci.

Now, this flies in the face of the usual tours by overseas acts (in particular) who put a lame-o act on first, so that they look pretty damn hot next. The Reverend must be damn sure of himself to be able to follow these bands.

But the Reverend recognises, admires and encourages talent, loves the wide diversity of bands within what people like to call a genre (rockabilly and roots, is one description), and is sanguine, apparently, about the chance of being blown offstage.

It doesn’t happen, but that’s because the Reverend is, quite simply, brilliant. 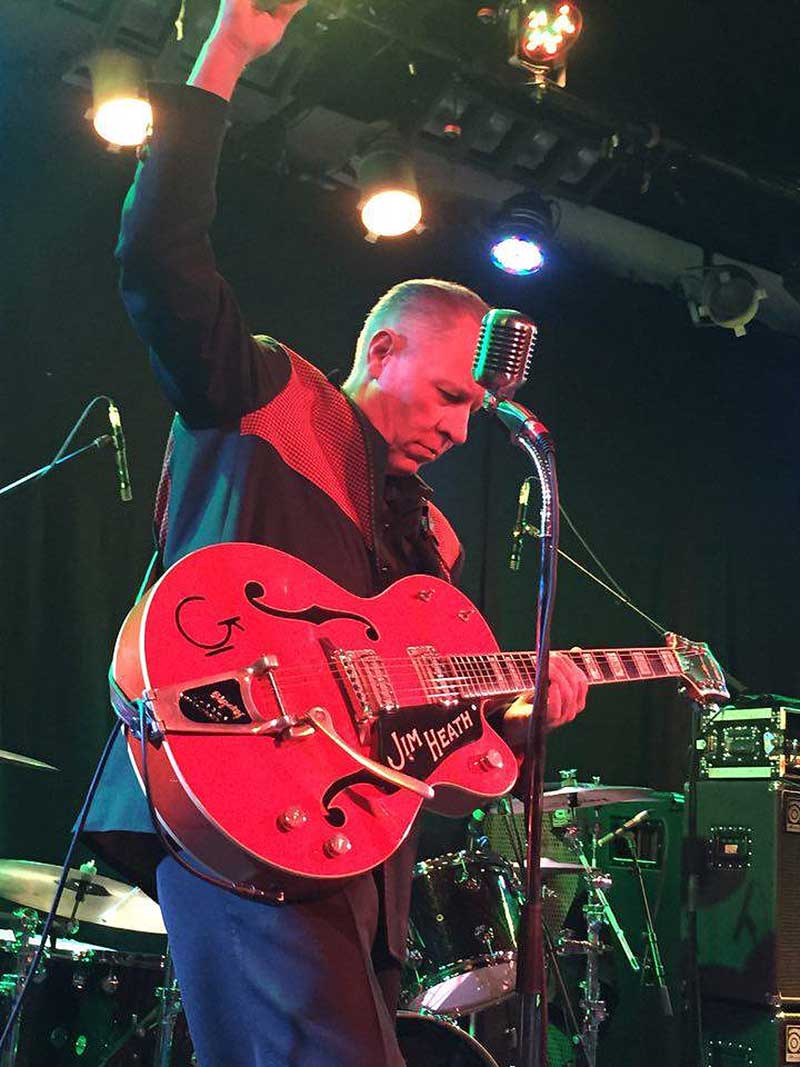 The setlist, as it appeared at the Rev’s feet (and firmly taped on all sides with gaffa tape so no set list thieves could whip it before he’s done) read: Big Sky/ Baddest of the Bad/ Psychobilly Freakout/ School of Rock and Roll/ In Your Wildest Dreams/ Zombie Dumb/ The Girl in Blue/ Devil’s Chasing Me/ Jimbo Song/ Little Queenie/ It’s a Dark Day/ Bales/ Tooth Brush/ Let Me Teach You How to Eat/ Big Little Baby/ Love Whip/ 400 Bucks/ Galaxy 500 — and then they simply went straight into their expected encore, Victory Lap/ Smell of Gasoline

The Reverend himself is a dapper, tidy, careful man who, to look at in passing, you might think he works in a chemist or something. That well-versed, remarkably genuine smile, the neat clean clothes, the spotless custom Gretsch (not a scratch) belies the fact that he plays tight, rippling rockabilly/ rock’n’roll with deft influences from the usual Elvis (the unscheduled encore tonight was CC Rider) to the wonderful Howlin Wolf. Dance? We couldn’t stop. One song bounced into another, the Rev’s vocals conjuring up stories of people we all know.

Just like his support acts, what we see is a strong, well-structured show, constantly involving the audience - sure, it’s a show-bizzy kinda thing, but the wonder of it is, not only does it work, we love it, and it never feels fake or smarmy. We’ve all seen that. This guy brought his band a long way just to play chilly Adelaide on a Sunday night; he must’ve wondered if he was going to fill the joint or whether Adelaideans would do their mysterious weird ‘stay at home ‘cos nothing’s on and feel sorry for myself’ thang.

The Reverend’s drummer, Scott Churilla, is one of those flash coves who can twirl and toss their sticks as they play up a storm without losing a beat - or a stick. By fuck he was excellent. Jimbo Wallace on the double-bass is a character-and-a-half, effortlessly drawing everyone in, controlling that thing (how he knows where the notes are, how he knows how to manipulate that clicking I don’t know) with the aplomb of long rehearsal and practice… when Jimbo heaves the thing onto the ground and the Rev hops on top … you know they probably do this at this point in this song every night, but by God is it effective.

The closer, “Smell of Gasoline”, featured that rare thing these days, a ferocious drum solo - and Jimbo and Rev walked offstage as Scott began making the walls shake. The man was so fast, so precise, and a joy to behold, flair and kit dominance rarely go hand in hand with drummers. I’ve not seen someone this skilled in many years: most bands can’t carry this off and rightly, don’t try.

After coming back onstage and rounding off “Gasoline”, the band left again, but were eventually persuaded back, the house music turning down as they headed into “CC Rider”: curiously, I thought, “CC Rider” was the least of the songs tonight, across all the bands.

The Reverend Horton Heat have a sound closer to rockabilly with touches of country - as with all the bands tonight, they’re not singing about a nostalgic world of dippy smarminess, or an idealised conservative 5ts construct, but a world as visceral and gritty as any Springsteen depicts - in fact, in some ways, there’s an eerie sense of familiarity here, like a song on the radio in an early Stephen King novel. And we danced most of the night, wondering what to do when the music stops.

The Reverend tours, tours and tours, because he’s that kind of animal. He loves the thrill of turning ordinary folk into happy, dancing, cheering individuals.

I fail to see why musical genres prevent people from turning up and having a blast at a great band. I was here at the Gov on Friday night, and it was a very different crowd. The only people I recognised from Friday was the Gov’s photographer. And that, I think, is ridiculous: in 1981 we went out and tried to get at any and all great music, regardless of origin. I mean, good music is good music, and gentlemen like the Saucermen, Pat Capocci and the Reverend Horton Heat are not only better than most, they make the world a better place.

Reverend Horton Heat on the Web