If you're hard of hearing, don't show up 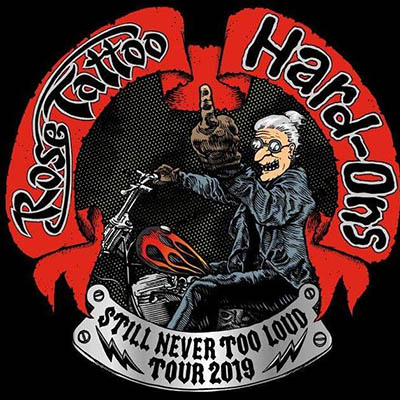 Rose Tattoo’s "Never Too Loud", released in 1997 through Repertoire Records in Germany, was a compilation spanning the band's career at the time. Now, 22 years on, the Hard-Ons join Rose Tattoo on their "Still Never Too Loud" tour heading out across Australia in March, April and May.

Thirty-five years since their formation, the Hard-Ons have amassed an unprecedented and never-to-be-paralleled 17 consecutive number-one releases on the Australian alternative charts, making them one of Australia’s most commercially successful independent bands. Their cult following extends into Europe and the UK, and as of 2019, their brand of unapologetic punk rock has never sounded better.

The band are fresh out of the studio having just finished recording their 12th studio album due to be released later this year.

Rose Tattoo hit the high seas on the Monsters Of Rock Cruise out of Miami in late February and headed straight into the recording studios in March.