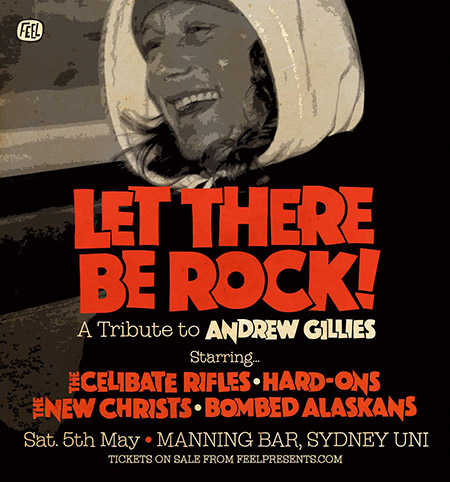 Andrew Gillies was my hero. He was the only person I had met besides my own father who was 100 percent unhindered by self-reflection nor self-appraisal. He had always adopted a sense of style that was so laid-back and undefined – and that was just because he really was never anything other than HIMSELF – and it was this amazing ability to be unaffected and unpretentious in the Sydney underground music scene, that made all the members of the Hard-ons adopt him as a true brother. The world has tragically lost a one-off gentle soul who made a profound mark on every person he met, too early. I love Gillsie. I can’t believe he is gone. - Ray Ahn (Hard Ons)

Joining The Celibate Rifles, Hard-Ons and The New Christs in this celebration of Andy’s life and making their Sydney debut at the same time will be the Bombed Alaskans; neighbours of Andrew in Uki and a supergroup of sorts featuring members of both The Celibate Rifles and The Eastern Dark.

It’s the proverbial sauce-of-choice on Gillies beloved falafel roll and its all going down in his honour Saturday May 5 @ Sydney University Manning Bar. Tickets on-sale 11.00am this Monday April 9 via feelpresents.com