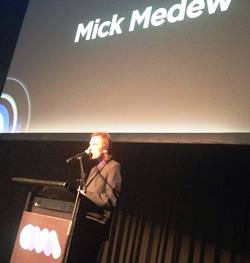 Mick has been on the Queensland music scene since the days of the seminal underground group The 31st, whose membership included future members of Died Pretty and the Hoodoo Gurus.

He went on to mainstream success with the Screaming Tribesmen, who touched the US Biillboard charts in the late 1980s and toured the US and Europe. Medew reformed the classic line-up of the Tribesmen for The Gathering festival in hometown Brisbane in 2011, and short Australian and European tours followed.

More recently, he's been fronting long-running Brisbane institution The Rumours and The Mesmerisers, as well as working as a solo artist.

Mick has been a mentor and friend to many rising Brisbane bands and is renowned as one of the scene's nicest guys. Mick Medew and The Rumours recently went into pre-production for a second album. The first, "All My Love", was on our own I-94 Bar Records.