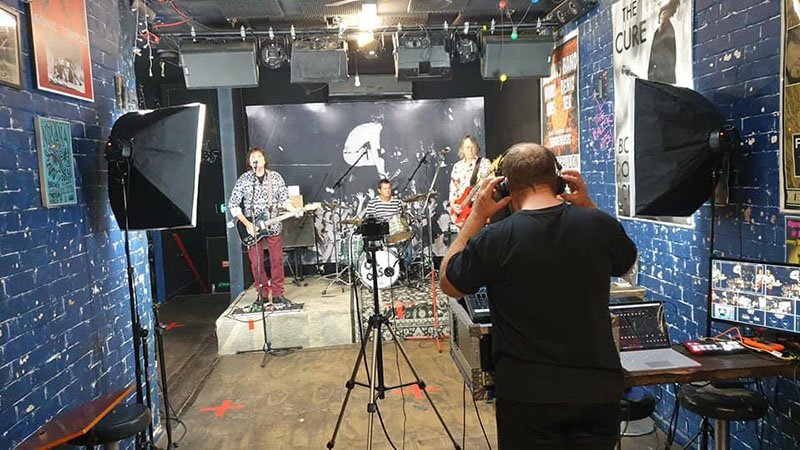 The On and Ons streaming from Sydney venue The Moshpit.

The COVID-19 pandemic has devastated the music industry globally. As if the digital disruption of music sales in the post CD era wasn’t enough, the closure of venues has killed the oldest revenue stream known to musicians, the live gig.

As the first industry to close and most likely the last to re-open, the meagre incomes of musicians have collapsed and the outlet for their creativity has disappeared. But being resilient and creative thinking beasts, the music industry and has turned its hand to live streaming as a way out of this abyss.

Here in Sydney, and in many other cities, new streaming venues have sprung up. Existing places have pivoted and popped in cameras and an Internet link. With the help of digital savvy crew and production people, gigs have been filtering through the web and there have been some killer content in the offering.

Zen Studios, a landmark rehearsal complex in Sydney’s St Peters, kicked off with a gig from 300 St Clair’s Mark Horne as a launch for his solo project. A gig in the true DIY spirit of Oz Rock, Mark and his mates dished up a tasty slice of rock for the ages. And it was free.

Just around the corner in Erskineville, the newly expanded small dive bar on the rise, The Moshpit, have been dishing up a few nights a week on their Mosh TV channel. In a slick little production environment, The Moshpit have hosted bands like White Knuckle Fever, ex-Happy Hate Me Nots frontman Paul Berwick's Magnetic Quartet and a mini-album launch for Sydney power popsters The On and Ons.

Moshpit has also been doing a pre-gig interview show, “The Pit Stop”. Tickets sales for the stream sit between $10 & $15 with the cash being spilt between the band, crew and venue.

Melbourne bands haven’t been sitting by idly waiting for everything to open up either. In recent weeks we’ve been treated to free shows by Kim Volkman and the Whisky Priests at the Dogs Bar in St Kilda, and a dynamite display of rock’n’roll from eternal teenagers, The Casanovas, from the Musicland complex. The quality of performance and production from both gigs was world class. Viewers could support the artists by using the tip jar, a concept imported from Music City USA, Nashville, Tennessee.

Up in the Sunny north, we’ve been treated to solo gigs from Brisbane mainstays Ed Kuepper, who did a virtual celebration for the 30th anniversary of “Today Wonder”, and a Sunday session weekly from ex-Tribesman and head Mesmeriser Mick Medew live from his home in Banyo. Mick has also done some long form gigs with his partner Ursula Collie, drawing from his extensive back catalogue. Both were sustained by donations to Paypal from viewers.

In the start-up space, Dave Tozer, frontman from Sydney band The Overtones, has built an impressive set up at the Streaming Factory in Sydney’s northern beaches. They’ve been dropping a gig a week at 8pm on Saturday from their space with HD cameras, moving lights and a full audio production in absolute killer quality.  Sydney’s Simon Chainsaw and The Liberators, The Overtones and other lesser known acts have been pushing out free shows that have been viewed around the globe.

Over in South Australia, Music SA has put together a streaming gig guide, in conjunction with themusic.com.au showcasing acts ,across the spectrum covering DJs and trivia to solo and full band gigs. They’re encouraging online ticket sales to offset the cost of production and to sling a few bucks to the acts. Likewise, the West Australian industry has been doing a series of benefit gigs to try and deliver some support, and a little bit of cash, to struggling WA musos.

Although it seems like musicians are adapting pretty well to the ”new normal” it is no substitute to hearing live music in sweaty bar live and loud… the associated workers, crew, bar staff, promoters, ticket and merch staff have lost their income overnight and it doesn’t look like it is coming back any time soon.

By supporting streaming gigs and kicking in a few bucks we can help our faves keep their heads above water until this chaos subsides and maybe even put some food on their table or help keep a roof above their heads. It ain’t ideal, but every little bit helps… so buy a ticket to a stream, buy a CD or T-shirt direct from the artists and keep hanging in their until we can all be in a loud darkened, smelly room together again enjoying what we love best.