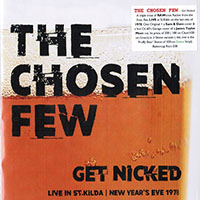 Another one from the archives and it’s not going to last long, with just 200 copies on offer. The three songs come from a New Year’s Eve 1978 show by proto-punks The Chosen Few at St Kilda’s Seaview Hotel (playing with Boys Next Door) and they're punchier than a front bar drunk at footy finals time.

“Get Nicked” is an original - a bare bones rock thumper in the vein of Johnny Dole and The Scabs or Rocks. Minimal chords and a maximised message, it’s catchier than a cold. The Sam and Dave cover features muscular guitar from Bruce Friday, who’s gnawing away on that signature riff like a dog with a marrow bone.

The flip is an obscure ‘60s cover of a song by homegrown band James Taylor Move and shows the wide range of influences The Chosen Few drew from. It’s close to the original but who would have known that in ’78? It's a pity The Chosen Few never got to play that support to Radio Birdman at the Fun House the year before - they were coming from some similiar places.

It’s a mighty restoration job by ubiquitous Mikey Young, whose involvement is a sure sign of sonic quality these days. Being a Buttercup release, it comes in three variants - one of which is a spray painted, pressed metal cover which will be sure to draw the interest of mailing X-ray machines the world over. Whoever thought farm implements were Australia Post friendly?

Buy it here and watch out for a show by a line-up of the Few at Maggotfest at the Tote in Melbourne in October.