That most durable of bands from the ‘80s revival of acid punk, The Fuzztones, are primed for a bumper 35th anniversary year with a European tour and a flurry of record releases.

UK label Easy Action is releasing the 5-CD boxset "Psychodrama” any tick of the clock now. It will include several previously out-of-print classics, with some new artwork, new photos, liner notes and bonus tracks. Also included will be a 7” single of the infamous Live with Screamin' Jay Hawkins & The Fuzztones EP, as well as a Fuzztones DVD capturing one of the band's greatest performances. It is available for pre-order here.

Not to be outdone, US label, Cleopatra, will be releasing a 3 LP boxset entitled "Alive & Deadly", which includes the Screaming Jay & Fuzztones 12" EP, "Fuzztones Gonn Primitive" (The Fuzztones & Craig Moore LIVE!) and a never-before-released live show from 1984 featuring several songs the band never recorded.

Last but not least, Germany's Houndgawd label will be re-releasing the classic “Lysergic Emanations” LP on vinyl, including bonus tracks from the 1985 John Peel radio sessions. An August release date is planned.

Watch the I-94 Bar for live dates.

Finally, here’s the definitive collection that does the Fuzztones justice.

There have been numerous re-issues, the odd compilation and a tribute record. There’s even a 2CD set of rarities. But packaging the first three of their seven studio albums - plus their debut live EP bulked-out to album length - in a box set, with bonus vinyl and a DVD tossed in - was an inspired idea.

The Fuzztones sprung up in New York City in 1980 and were the vanguard of the garage rock revival wave. Along with the California-based Bomp label, the Cramps and Lenny Kaye’s seminal “Nuggets” compilation, the Fuzztones opened ears to a whole new (old) world of Farfisa organs and distorted Vox guitars.

Raw Heat: The Real Sound of 'In Heat' - The Fuzztones (Go Down)

It was pointed out recently by someone with good judgement that there wasn't a lot of love for The Fuzztones at the I-94 Bar. That's more a measure of what we've had time to review, not a reflection on the band. Here's a recap of a 2011 release on Italian label Go Down of demo tracks that presaged their 1989 "In Heat" album, the one that should have broken them worldwide on the Beggars Banquet label.

"Raw Heat" shows what legendary producer Shal Talmy never gave "In Heat": A Big Set of Balls. That's the short story. Back in the '80s, everything that was old was new again and the same went for producers. The physically ailing Talmy was all but retired, with credits like The Who and the Kinks well behind him. The band needed someone to referee its own creative differences (principally between Rudy Protudi and lead guitarist Jordan Tarlow). Beggars had signed the Fuzztones on the strength of their live show, a corker first LP, their demo's and a huge push from The Cult's Ian Astbury. Shalmy did the deal and came out of retirement. If only the label had asked the Kinks, first.

"Raw Heat" features most of the tracks that made "In Heat" but none of the thin production or covers ("I Can't Control Myself" and "You Must Be a Witch".) "In Heat" was mostly recorded with a new band after Protudi upped and moved from New York City to LA. It wasn't a patch on it heir debut, "Lysergic Emanations", and of course The 'Tones were dropped from their major label and sent fro the indie back-blocks. Not a bad place to be sometimes but you have to ask 'What If?'

It's hard to see what wasn't to like about this album in its original, unrefined form. "Cheyenne Rider" struts magnificently (and, if anything, could be given even fuller fuzz treatment to bring the lead guitar to the fire.) "One Girl Man" is a radio hit in this or any former world. "I'm Gonna Make You Mine" has the right mix of swelling organ and underlying fuzz with a killer chorus.

The story's all here (if you can read the fine print on the back of the record label (mine's a CD, not an LP) and the up side of "In Heat" is that its poor sales were no barrier to Europe embracing the band in a huge way. It was a breakthrough of another kind, making The Fuzztones the first of a rash of '60s revivalists to crack it for a major label deal. If the floodgates didn't exactly blow wide open the mindsets - and listening tastes - of many were altered by that very fact. Slip this into your player or onto your turntable and celebrate that fact. "In Heat" never sounded this good. 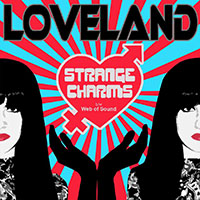 What a monster of a 45. Two songs of fuzzed-up,slamming ’60s goodness from Germany, wrapped up in a full and contemporary (although not overly so) sound.

Loveland is a vehicle for Lana Loveland, organist for the a lineup of The Music Machine and the now EU-based Fuzztones and the better half of that band’s Rudi Protudi, with whom she has recently birtheed a child. A prog rock lullaby this single is not.

“Stranger Charms” kicks off with a microsecond throb of Rudi Protudi's bass before a wall of crunching, insistent guitar from ex-Fuzztone Lenny Svilar arrives. The song sounds like a cross between the early versions of the Lime Spiders and The Stems. Lana Loveland’s clipped Germanic purr sits perfectly in the middle of the mix while Svilar’s guitar pans left and right.

The aptly-titled “Web of Sound” adds Lana’s pulsing keyboard to the mix and is a nasty slice of acidic punk. Protudi and drummer Oli Freidrich lock in and lay down a sonic bedrock for the other two to add colour. Ms Loveland has an agreeable and authoritative vocal. More serrated edge guitar takes the song out. Again, there are no surprises but so what when it's this great.

Get your mouse pointed at this link and order a copy. I'm off to find myself a copy of the Loveland album that pre-dates it.