Plans are underfoot to make a movie about the Flamin' Groovies with a Kickstarter campaign raising more than $US10,000 of its $70,000 target with a month to go. Watch the promo below, then make a donation here. 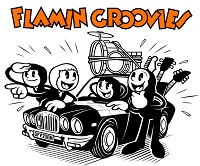