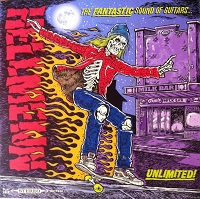 The quick version? Fourteen tracks. The cover doesn’t lie. Wall-to-wall guitars. Rocks harder than a Manly ferry on a cross-Sydney Harbour run in a 40-knot gale. The long version? Read on…

“The Fantastic Sounds of” has the blessing of Dave “Spliff” Hopkins, their mercurial guitarist, and frontman Ben Brown, whose stellar “surfing dead” artwork has not only adorned their past and present releases but those of Massappeal, Red Kross and Bored! They were the core of the band. Hopkins now lives in WEstern Australia and plays in Purple Urchin, while Brown is still a stellar artist.

The Hellmenn sprang from the loins of the Sydney musical underground in the halcyon late ‘80s, rolling out a long-player and numerous EPs and singles until grunge, random breath testing, poker machines and venue licensing red tape sucked the marrow out of the local live scene in the early ‘90s. The Hellmenn were proud products of the city’s Northern Beaches - the place that spawned Midnight Oil, Asteroid B612, the Celibate Rifles, to name some notables. There were many more.