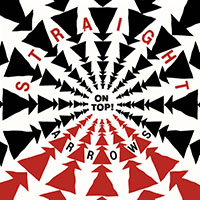 They’re not its most prolific band but they’re one of Sydney’s best. The Straight Arrows seem like kids but have been around for nearly a decade and this is only their third long player. It’s doubtful they care about keeping score and neither should you.

What you need to know is that “On Top” is uncomplicated, nicely raw and melodic. Two guitars, bass and drums and well-crafted, economical songs. Tight but loose. Cleaner-sounding on this record than before but still rough enough around the edges.

Owen Penglis writes good songs, alright. Cock an ear to the grinding yet light fuzzfest of “The One” or the buzzsaw burst of album opener “Nothing To Me”. They’re instantly catchy - like early Ratcat to cite a band that was around before these guys were born. Penglis and Al Grigg weave curtains of fuzz with their guitars and the energy level never sags.